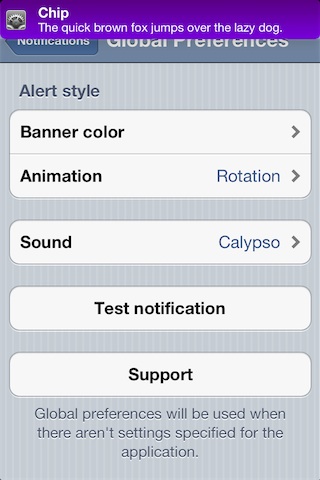 With entries like Vexillum and ColorBanner, there’s no shortage of jailbreak tweaks that allow you to customize your notification banners in iOS 5. But neither of those are as deep and complete as Chip.

As simple as its name may make it seem, Chip is by far the deepest of the three tweaks mentioned. It allows you to customize banner notification background color, text color, border color, and gradient using simple RGB sliders.

Chip also includes the ability to customize the notification sound and banner animation. If you’re looking for the best tweak for customizing banner notifications, then look no further…

Along with the global settings, Chip also features dedicated settings for each app that utilizes notifications.

Chip has yet to appear on the Cydia store, but its release is imminent. When it does appear, you’ll be able to purchase it for $1.99.

The developer of Chip promises iOS 5 compatibility across the board, along with new banner animations with every update.

We’ll be sure to let you know once Chip has officially launched. Until then, why not share your preliminary thoughts on the tweak from what you’ve seen thus far?