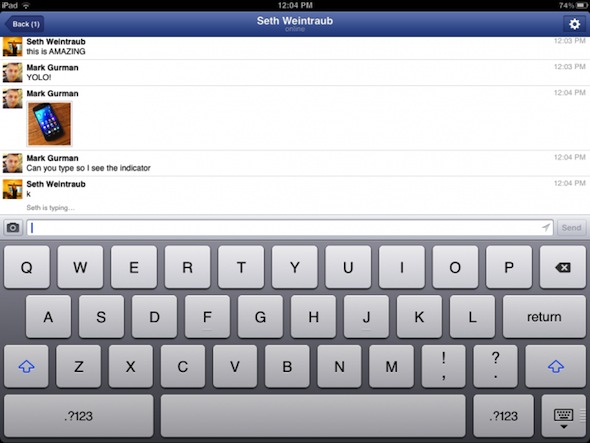 The Facebook Messenger app debuted last fall and has remained one of the most popular iOS apps ever since. It seems a lot of members of the social networking service use the standalone messaging app over standard texting.

So far, the software has only been available [for iOS] on the iPhone. But it looks like that could be changing in the near future. According to 9to5Mac, Facebook is working on an iPad version of its popular Messenger app…

The site says that the app is extremely similar to its iPhone counterpart, and although there is no ETA, it is being actively worked on. The report also mentions that the previously-rumored iPhone app update with built-in video chat is coming along nicely, and it should drop sometime this summer.

Honestly, I wish Facebook would look into improving its current iPhone app before taking on any new iOS projects. But I’m sure there are a lot of people looking for a universal messaging app for their iPads.

What about you? Are you excited for an iPad Messenger app?