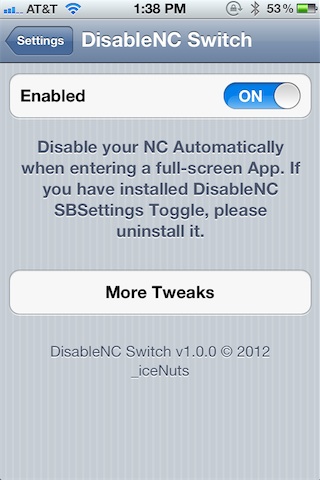 Don’t you just hate it when you’re in the middle of playing a game and you accidentally invoke Notification Center?

I’ve found that in particular, games that require a lot of random swipes suffer the most from this issue.

Thankfully, a new jailbreak tweak has been created to put an end to this nonsense, and it’s appropriately titled DisableNC Switch…

DisableNC Switch is a simple tweak that places a toggle switch in Settings app. Enabling the tweak will prevent Notification Center from loading whenever it detects you’re in a full screen app.

It’s a very basic tweak, but proves to be instrumental when you’re trying to nab the high score in a full screen game.

If this sounds like music to your ears, take a stroll over to Cydia’s ModMyi repo where you can download it for free.

What are your thoughts?