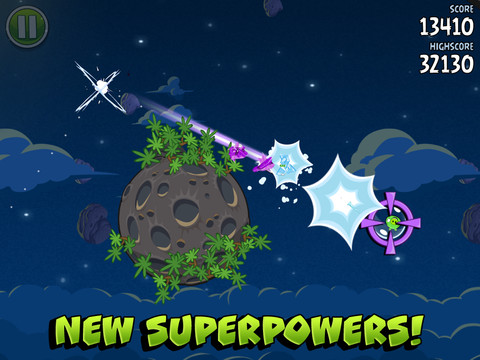 Angry Birds Space, the latest installment in the popular birds vs. pigs videogame series, has amassed more than 50 million downloads on all platforms in the 35 days since its March 22 launch, Rovio announced on Twitter this morning.

This makes Angry Birds Space “one of the fastest growing games ever” and by far the fastest-growing game on mobile, the company bragged.

Previously, the game zoomed past the ten million mark in less than three days. Rovio largely owes such a successful launch to Angry Birds’s seemingly unstoppable popularity, still rising across the globe. Another crucial factor: Apple’s iOS platform which now powers more than 365 million devices, as this is where the vast majority of paid downloads occur…

An accompanying post over at the official Rovio blog teases “something even bigger” coming your way:

There’s only one conclusion to draw: something even bigger is on its way! Stay tuned and keep flinging those Birds!

I think it just serves to highlight how we’ve come a long way since the App Store launched in the summer of 2008.

Granted, Angry Birds is in a category of its own, but the fact that popular mobile games nowadays clock in tens of millions of downloads in a matter of days or weeks really highlights the sheer size of the iOS platform.