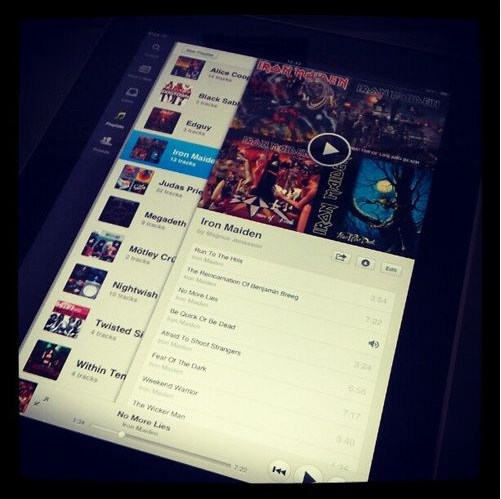 I don’t know what the folks over at Spotify have been thinking all of this time while their competitors have released iPad versions of their mobile offerings, but it looks like they’re finally about to snap out of it.

Why we’ve had to wait so incredibly long for an iPad version of Spotify is anyone’s guess, but it looks like a release is finally coming to fruition after what seemed like an eternity of waiting.

Has Spotify been resting on its laurels all of this time, or were they just working on providing the absolute best iPad music experience known to man? If the puzzle pieces fit, we could be finding out very soon…

According to the Verge, a Swedish tech consultant posted the above photo on Instagram, but it has since been removed from the photo sharing service. Apparently the photo is from a beta version of Spotify for the iPad.

Conincedently (or not), Spotify has planned a “special announcement” for April 18th, in which Spotify’s CEO will hold a briefing in NYC. Does this mean we’ll see an iPad version hit the App Store this Wednesday? I’d say it’s probable, but given how long we’ve been waiting thus far, we wouldn’t be totally shocked if it had to do with something else.

I really, really, really hope that we see an iPad release soon. I know I might garner a lot of hate for this, but I honestly can’t stand the current alternatives that are Rdio and MOG. In my opinion they pale in comparison to Spotify in so many areas that I just can’t bare to use any music streaming service on my iPad. Please Spotify, listen to your fans.