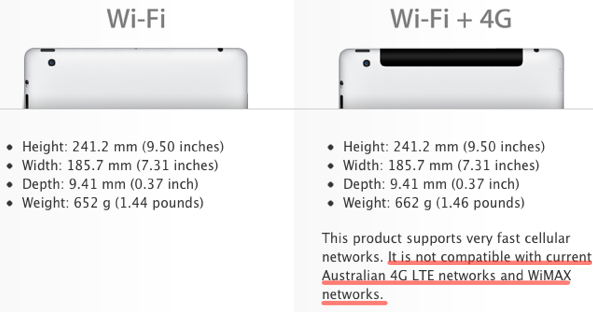 Apple’s doing lots of clarifying lately, that much is clear. Just this day, the company finally tweaked the problematic “4G” wording for the new iPad in Australia and clarified warranty coverage options in the European Union.

In both these instances, Apple moved only following regulatory pressure or when threatened with class-action lawsuits.

So, if you live in Australia and felt misled with Apple’s “4G” iPad marketing in the country, you’re in for a treat. Hop over to the iPad specs page on the Australia online Apple store and see an added line stating the device “is not compatible with current Australian 4G LTE networks and WiMAX networks”.

And in the European Union, Apple now provides a new page on its website that seeks to educate customers on the differences between the AppleCare coverage and statutory warranty requirements imposed by the European Union.

These include a one-year standard AppleCare warranty coverage versus a two-year requirement in the EU and the fact that Apple’s warranty covers only their own products, while EU consumer protection laws require sellers to provide coverage for both first- and third-party products.

As for the resolution of the “4G” iPad marketing in Australia, it would not have come had it not been for lawsuit threats coming from the Australian Competition and Consumer Commission (ACCC).

Though Apple continues to offer refunds to Australian buyers who felt misled with “4G” claims, the ACCC is still pushing for a full trial in early May.

This case is far from being closed, mind you…

Carriers overseas haven’t been impressed with “4G” iPad branding from the onset. Plus, lawsuits are still looming in the United Kingdom, Denmark, Sweden, Norway, New Zealand and elsewhere.

Truth be told, we gotta give Apple some slack here with the “4G” iPad situation.

The problem is, no such thing exists as the fourth-generation Long-Term Evolution radio technology universally adopted by wireless operators around the world and commonly supported in mobile devices.

LTE can be implemented in two different variants: paired spectrum bands (FD or frequency-division) or a unified band (TD or time-division).

Carriers get to pick their LTE flavor.

Another facet to this adding to the overall complexity are the radio-frequency components for each band in a mobile device. To get a better understanding of how the iPad problems exposed greater LTE roaming challenges, check out an informative article over at MacWorld UK.

In my opinion, Apple isn’t doing itself any favor by deceiving people with ambiguous marketing. They could have easily avoided this mess. I’m sure Apple’s marketing department employs some smart people who are well-aware these things more often than not backfire.

For example, I’m dumbfounded Apple would only put the “sequences shortened” disclaimer on Siri television commercials when folks took them to court. It’s hardly surprising, even knowing it happened numerous times in the past.

I’m having a big issue with Apple’s amped up marketing. As of late, it’s increasingly treading the fine line between facts and sugarcoated reality, thus unnecessarily provoking litigation.

Being honest upfront about your product’s capabilities – even when it doesn’t jibe with your advertising agency’s awesome creative concepts – pays off in the long run.