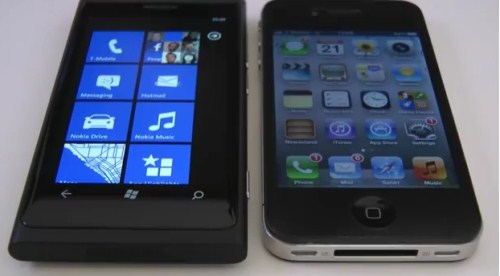 Earlier today we reported that AT&T is preparing to launch the Nokia Lumia 900 — a Windows Phone handset that the carrier believes could outsell the iPhone when it debuts next month. And according to a new survey, that may not be as crazy as it sounds.

PC World recently conducted a large-scale survey for its annual Readers’ Choice Awards. The poll collects consumer feedback on wireless carriers, mobile operating systems, and smartphones. And some of the results may surprise you…

In the “Mobile Operating Systems” category, consumers ranked both the iPhone and Windows Phone 7 an 8.7 out of 10. Perhaps even more interesting is that they ranked Samsung’s Windows Phone offerings above the iPhone in the “AT&T Smartphones” section.

For the most part, however, the iPhone came out on top in a majority of the Readers’ Choice categories — which isn’t surprising considering the handset’s history of customer satisfaction. But it’s a bit surprising to see how well Windows Phone performed.

If Microsoft’s Windows Phone devices are so popular with consumers, why aren’t they selling by the millions? One word: apps. When PC World asked its readers the number one reason why they chose the iPhone over other handsets, 63% of them listed app availability.

Lack of app selection is a harder problem to solve than you might think. First you need a wide install base to attract developers — who are already designing apps for hundreds of millions of Android and iOS customers. And you need developers to make apps, and you need apps to attract customers. It’s a vicious circle.

But just because it’s difficult, doesn’t mean it’s impossible. And Microsoft has enough clout and enough money to make almost anything happen in the mobile space. It’ll be interesting to see if Windows Phone can gain any market share ground on its competition this year.

What do you think? If Windows Phone had a better app selection, would you switch?