With over a billion wireless subscribers, China is certainly one of the most sought-after mobile markets. Heck, China Mobile (the world’s largest carrier) alone has over 650 million customers.

Now it looks like that market just got even more valuable. According to Flurry, a mobile analytics company, China is now the world’s fastest growing smart device market as well… 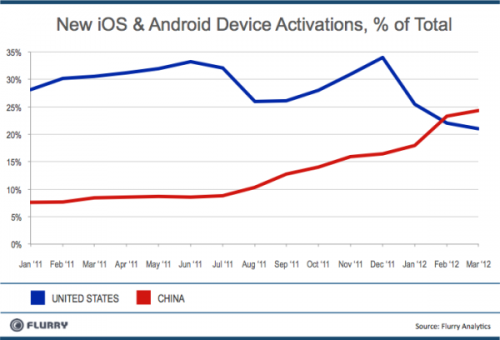 Flurry’s report shows that the number of monthly iOS and Android device activations in China has just surpassed the United States for the first time. So what do you do when you have this fast-growing smartphone market with a billion potential customers? You get in there as fast as you can.

And that’s exactly what Apple is doing. Earlier this year, the Cupertino company inked a deal with China Unicom to start selling its popular handset. And a China Telecom deal quickly followed. Now the word is that Apple is going after China Mobile — who already has 15 million unlocked iPhones on its network — as well.

The smartphone race in China is going to be one of the most important ever for both Apple and Android partners. It’ll be interesting to see who comes out on top.