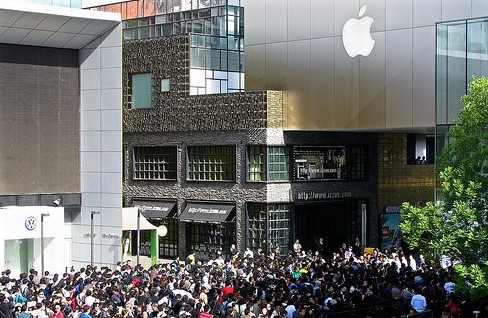 While some of us have had the iPhone 4S for nearly three months, folks in China are just now seeing the handset in the flesh. And if you thought the hype for Apple’s new smartphone was starting to die out, you’re very much mistaken.

Several news outlets are reporting today on the massive lines that have formed outside of Apple Stores in both Beijing and Shanghai, China, for the iPhone 4S launch. Apple’s latest handset is expected to go on sale in less than one hour.

After months of waiting for government approvals and certifications, the iPhone 4S is about to launch in the world’s largest country. With nearly a billion subscribers between its top three carriers, there’s no doubt that China is a major smartphone market.

But not all of them will get a shot at the 4S this time around. The device is currently only available on the country’s second largest carrier, China Unicom, who happens to be giving away the handset for free with two and three year contracts.

Apple’s iPhone 4S international rollout has been the fastest in the company’s history. Just three months after unveiling the device, it’s now available in more than 70 countries around the world. With that in mind, we wouldn’t be surprised if Apple sold more than 30 million iPhones this quarter.