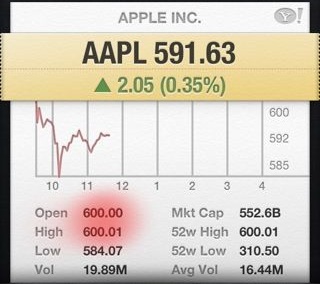 It would seem as if Apple could do no wrong these days. It recently introduced a new tablet that, even though it has yet to officially go on sale, has created quite the buzz among consumers. And its stock has just hit an all time high.

At the end of February, AAPL was flirting with the $550 per share mark. But it fell back down below $520 just before the new iPad was unveiled. Ever since then, however, the stock has been on an unstoppable upward climb…

Apple shares touched just above $600 this morning, once again setting a record high for the company. It seems to be doing that a lot lately.

We’re not sure what’s more impressive, the fact that AAPL is flirting with the $600 mark. Or the fact that it is doing so just 30 days after crossing $500 per share for the first time. Even if you don’t follow the stock market, you know that’s insane.

Analysts have already started raising their 2012 projections for the company to over $700 a share. And some are even predicting it to approach $1000 by this time next year.

Fun fact for the day: At $1000 per share, Apple would be worth around a trillion dollars. That’s right, a trillion.