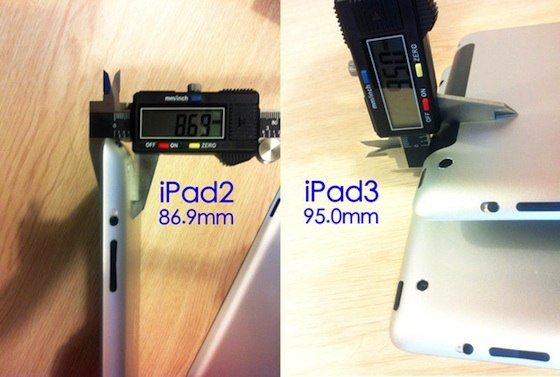 Wow, there has been an onslaught of iPad 3 news this morning. Not only did Apple send out media invitations for what is expected to be its iPad 3 event, but we’ve also heard multiple reports on the new tablet.

The latest news comes from Apple.pro — a Chinese blog known for leaking information on upcoming Apple products. The site points to new photos of what it claims to be the rear shell of an iPad 3, along with some interesting details…

All of the evidence we’ve seen up to this point regarding what Apple’s new tablet will look like has pointed to two things. One, the iPad 3 will bear a striking resemblance to its predecessor. And two, it will be a tad thicker than the previous version.

These new photos echo the two theories, depicting iPad 2 and iPad 3 shells being measured. As you can see, the iPad 3, which measures in at 9.50mm, comes in 0.81mm thicker than the 8.69mm iPad 2. The consensus seems to be, however, that the difference will be almost undetectable to most users.

You might be wondering why, when the rest of the industry is trying to make their products thinner, Apple chose to make the iPad 3 thicker. The answer is simple — components. Apple obviously needed the extra room to house the larger processor, sharper display, and LTE radios.

Want to see the real thing for yourself? Make sure you tune in to iDB on March 7th for complete iPad 3 event coverage.