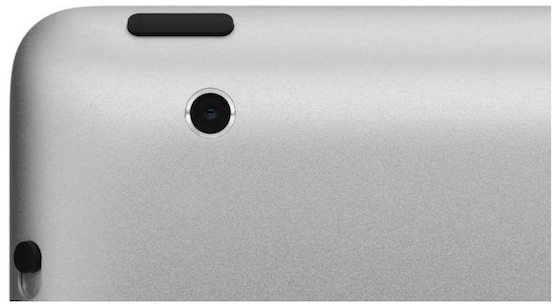 Aside from housing the same display as its year-old predecessor, most of the criticism the iPad 2 received was aimed at its cameras. And between its VGA-quality front-facing sensor and dismal rear shooter, it was well-warranted.

But it looks like things will be different this time around. The latest iPad 3 rumor suggests that Apple’s upcoming tablet will feature some major camera upgrades, including a front camera capable of FaceTime HD, and more…

The gossip comes from iLounge Editor in Chief Jeremy Horwitz, who started tweeting iPad 3 details this afternoon. He credits his knowledge to an unnamed source who has apparently seen the unannounced tablet.

“A few next-gen iPad notes, ahead of the show. Both cameras are getting upgrades. Front goes HD, rear becomes iPhone 4/4S-like (bigger). Body of the next iPad is, as we previously reported, getting just a little thicker to accommodate new parts – little = 1mm give or take. Curve radiuses on the body will change only a little to accomodate the added thickness, not dramatically. Think iPad 2 Pro, not a redesign.

Incidentally, our source believes that the next iPad’s rear camera will be the same as iPhone 4S’s, b/c camera hole is very similar.”

We’re not familiar with Horwitz’s track record regarding rumors, but an iPad 3 with upgraded cameras doesn’t seem very far-fetched. The tablet is almost certain to feature a higher resolution display than its predecessors, so it would essentially need higher-res cameras to keep up.

Horwitz notes that the new tablet will debut some time around late February or early March, starting at $499 as usual. He also says it looks like Apple will be keeping the iPad 2 around for $399, with the possibility of an even cheaper model with lower internal storage (think $299 8GB model).

We think, by the sound of things, that Apple’s next-generation iPad is shaping up rather nicely. And in the face of growing competition, it needs to hit a homerun with it if it wants to continue dominating the tablet market.