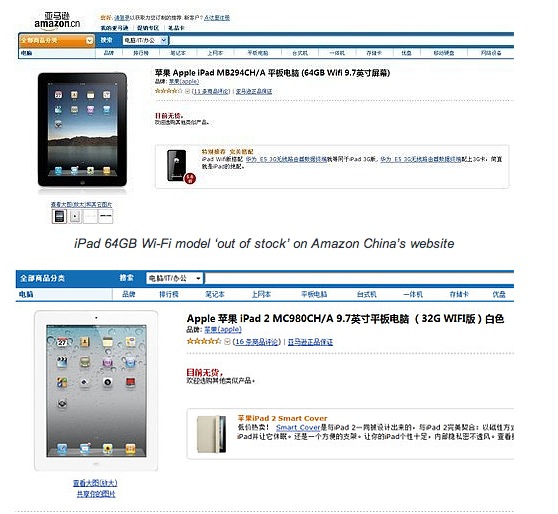 Apple has seemingly told Amazon China to pull the iPad from sale in the country, according to a report from MIC Gadget.

The news comes as Apple is in the midst of a trademark battle in the region, with display maker Proview claiming to own said trademark for use inside China. Interestingly, Proview also claims to have had no knowledge of Apple’s latest move, stating that the company had not requested Apple remove the iPad from sale in Beijing, which is where Amazon is located.

Unsurprisingly, Apple is currently refusing to comment on the situation…

Amazon’s Chinese arm claims that Apple did indeed request the online retailer pull the iPad from sale, with a search for the term “iPad” currently offering up accessories for the tablet, but no actual iPad. MIC Gadget has discovered an iPad page on Amazon China, but the price and “BUY” button are both missing.

Fellow online retailer, Suning, has also apparently stopped offering the iPad to its customers, though other e-tailers have not yet followed in their path.

If Proview did not require Apple to cease online sales, then why make the move? Curiously, the item is still available for purchase from Apple’s own online store, somewhat adding to the confusion.