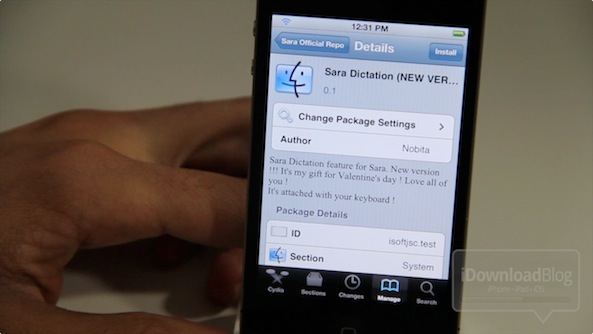 Sara Dictation is a jailbreak tweak that allows you to have Siri-like dictation on a non-iPhone 4S device. This isn’t the first time we’ve seen a tweak that allows this — siri0us immediately comes to mind — but it is certainly worth trying.

If “Sara” sounds familiar, that’s because it is. It’s from the same developer that brought you the Siri alternative named Sara, which we covered last week.

If you want to try Sara Dictation, add the following repo to your Cydia sources: http://isoftjsc.com

Once the above repo address is added, you can install both Sara and Sara Dictation.

I like Sara Dictation — not only does it work fairly on par with true Siri dictation, but it also supports a variety of languages.

The only real downsides are that the dictation button on the keyboard isn’t Retina display enabled, and it sometimes makes the space bar appear a little funky. But those things are a small price to pay for those desperate for decent dictation capabilities.

If you’re running a pre-4S device, and want to join the integrated dictation party, then Sara Dictation is a free solution that might just meet your needs.