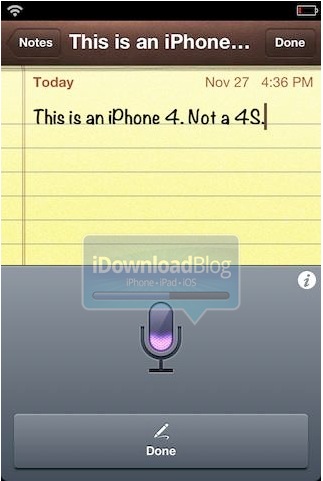 Hackers have been trying to port Siri to older iDevices since the virtual assistant was announced alongside the iPhone 4S. Siri doesn’t technically require the new handset’s A5 processor and increased memory, so limiting the technology to the 4S is clearly a marketing maneuver.

We’ve already seen Siri running on an iPhone 4, so we know it’s possible. But those instances required special circumstances, and we didn’t know if we’ll ever see a public release. Siri’s dictation feature has now been made publicly available in Cydia for the iPhone 4, and it actually works.

Developer Eric Day has uploaded a jailbreak package entitled Siri0us. Day describes his tweak as “Siri dictation for your iOS 5 devices. No iPhone 4S keys/files required.” And believe it or not, the utility actually works. We’ve tested it out on a couple of iDevices.

Dictation works great on the iPhone 4, transcribing words into text rather quickly. The technology is actually Naunce-based dictation, but the end result is pretty much the same as Apple’s Siri. As you can see in the video, small ads are displayed in the bar above the mic icon. You will need an internet connection for the microphone to show up.

We have also confirmed that Siri0us works on the iPod touch 4G.

To get Siri Dictation running on your jailbroken iDevice, simply add http://apt.if0rce.com to your list of Cydia sources and search for “Siri0us.”

The developer has noted a bug that some may run into when trying to install. If your iDevice keeps respringing, do not restore! Use a SSH tool to remove the /System/Library/PrivateFrameworks/AssistantServices.framework file.

It took us 5 or 6 retries to download the package, so if you get any errors just back out and start over. Also, keep in mind that we have the tweak running on testing devices with no personal information on board as a precaution. However, we have no reason to believe that Siri0us is dangerous.

Update: Several readers have tipped us that this does indeed work on the iPhone 3GS.