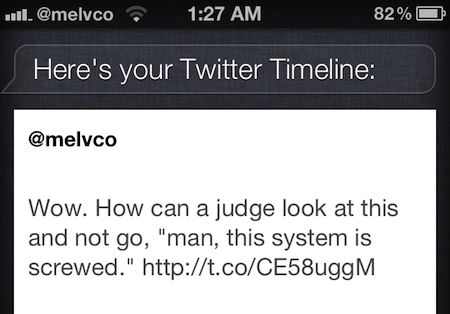 When iOS 5 launched last Fall, we figured that the Notification Center would become the new hot bed for jailbreak tweaks. But it seems like Siri has also become a popular choice among developers.

The latest package to surface in Cydia that adds functionality to the digital assistant is TweetLine. The tweak allows you to use Siri to call up the 5 most recent tweets from your Twitter timeline…

Installing TweetLine is as easy as downloading it from Cydia and watching your device re-spring. Once installed, you can access the tweak by calling up Siri and saying “timeline.” This will bring up a small window in Siri’s UI showing you tweets from your Twitter account.

In all honesty, TweetLine might come in handy when you want to quickly glance at your timeline, but that’s about it. Tweets are shown in plain text, without hyperlinks, so there’s no way to respond or launch a Twitter client from within Siri. I’ve also noticed that sometimes it takes a minute or two to load the timeline, which is another turn off.

Combine this, though, with another tweak like AssistantExtensions, and you might have a suitable Siri-Twitter solution until something better comes along. Hey, at least it’s free. If you’re interested, you can find TweetLine on the ModyMyi repo in Cydia.

What do you think of TweetLine?