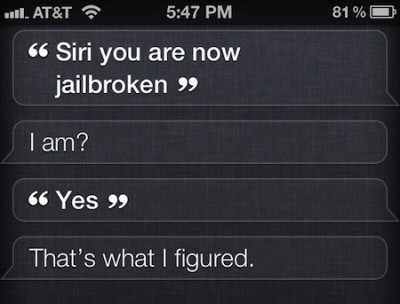 So after months of waiting, you finally got to jailbreak your iPhone 4S yesterday. What do you do now? Sure, you’ll install SBSettings, Activator, and a couple other essential utilities. But then what?

Remember that the 4S has a feature that no other iOS device has: Siri. And jailbreak developers are already finding out ways to customize the assistant. Here’s three Siri-related tweaks we’ve come across so far…

The first Siri-flavored tweak we’re going to be looking at is Hands-Free Control. As the name suggests, this utility allows you to activate Siri without having to hold down your iPhone’s Home button. It pulls this off by running a continuous listening service in your iPhone’s background that will activate Siri anytime it recognizes a set keyword. The default command is “Siri,” but you can customize that along with sensitivity and other options from within the Settings app. As you can imagine, this tweak could seriously affect your device’s battery life. So take that into consideration before you download. Hands-Free Control is available in Cydia, in the BigBoss repo, for $1.99. 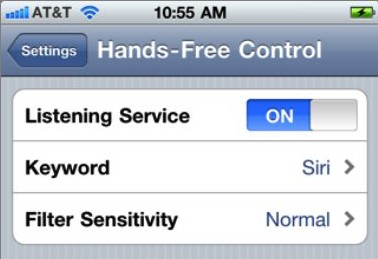 The title of this tweak also gives its purpose away. Siri UI Backgrounds allows you to customize the assistant’s background image that shows while Siri is in use. By default, Siri’s background is a dark-colored linen texture. But using Siri UI Backgrounds, you can change it to practically whatever you want. The only caveat is that this particular tweak requires you to have WinterBoard installed — an app that has a history of affecting device performance. As long you’re OK with that, however, Siri UI Backgrounds seems to work as advertised. And it doesn’t hurt that it’s free. Download the tweak from Cydia, in the ZodTTD & MacCiti.com public repo.

We already touched on this tweak yesterday, but it certainly belongs in this group of utilities. What better way to tweak Siri than to customize its most recognizable feature, the mic icon? By itself, Siri Mic Colors is an app that morphs the color of Siri’s microphone into an array of shades based on the volume of your voice. But once you add its repo to your list of Cydia sources, you get access to Red, Blue, Green, and Yellow mic colors. The best part is that they’re all free. The worst part is, like Siri UI Backgrounds, Siri Mic Colors requires WinterBoard. You can find the tweak, along with the other mic colors, in Cydia. Just add http://repo.technetec.com to your list of sources.

We assume this list will grow quickly now that the iPhone 4S jailbreak has gone public. Be sure to let us know if we missed any awesome Siri tweaks in the comments below!