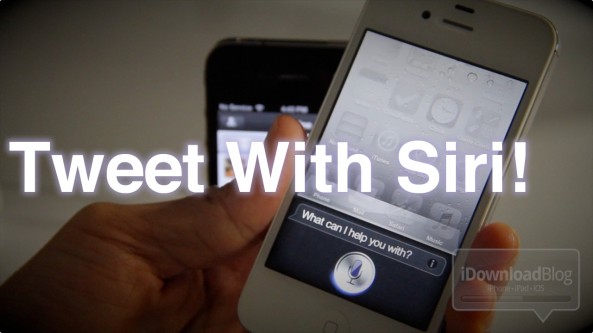 It was only a matter of time, but the inevitable has finally happened. Even though you could already use this workaround to send status updates to Twitter using Siri, you can now tweet with Siri courtesy of an upcoming jailbreak tweak.

The yet to be named tweak is making its way around the blogosphere, and should be released to the public in the very near future.

We’re pretty impressed by how accurate tweeting with Siri actually is, but that should be expected since Siri is very precise when it comes to dictation.

Although the text response still needs some ironing out — Siri clearly contradicts herself by saying “Sorry Jeff, I can’t help you with Twitter” — tweets are still sent out immediately, and she verbally acknowledges the fact shortly thereafter.

I think it’s obvious that Apple eventually plans to incorporate things like verbal status updates and verbal tweets into iOS, but the future is now if you have a jailbroken iPhone 4S, or another jailbroken device running Spire for that matter.

I for one can’t wait until the final product is released, I can see myself using this quite often. What about you?