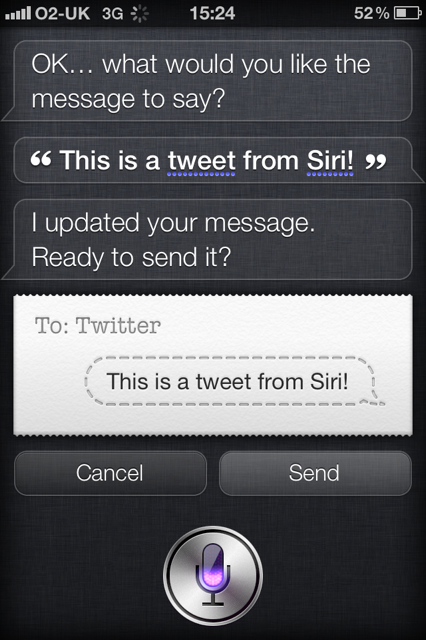 Apple’s unique selling point for the iPhone 4S is Siri, a digital assistant that knows what you mean and how to answer your questions.

For all Siri’s polish and ability to take real language and turn it into emails and text messages, there is one glaring omission from its repertoire, and that’s the ability to tweet or update your Facebook status.

With Twitter now very much built into the fabric of iOS, it has been a surprise to many that Apple didn’t give Siri any hooks into the world of 140 characters and less. But fear not, for those of us that are addicted to Twitter can now send messages using Siri, and it’s super easy to set up…

One little-known feature of Twitter is the way it allows users to send tweets via SMS. Those messages are then added to the Twitter stream that is associated with your phone number. Can you guess where we’re going with this yet?

What all this means is that with one new contact, preferably called “Twitter,” you can actually use Siri to send tweets.

To turn all this on, you’ll need to head on over to Twitter.com, and then your Settings page. Hidden in there you’ll find your Mobile settings.

The process itself is trivial, and involves telling Twitter your phone number, and then sending a message to the provided short code. Once Twitter authenticates your phone number, you’re good to go, and any message sent to that short code will be tweeted from your account.

A word of caution: Be sure to turn off all the SMS notification settings that Twitter seems to turn on by default, especially if you already get those notifications via push messages on your iPhone. That is, assuming you don’t want everything to come through twice! 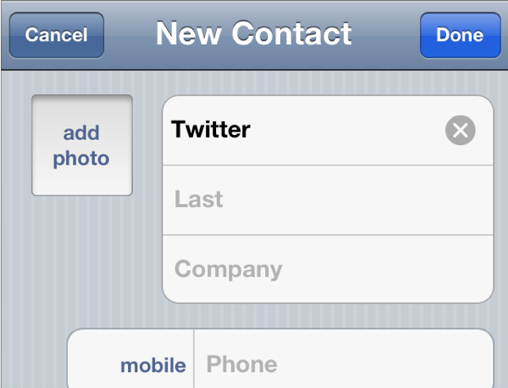 Now you can tell Siri to send messages to your new “Twitter” contact, just like any other contact. The only downside is the fact that you won’t know how many characters you’ve used, but hey, beggars can’t be choosers!

Facebook works in a very similar way. Head on over to Facebook’s Mobile settings page, and fill in all the required fields. After receiving another confirmation code, your mobile’s number is added to your Facebook account.

To update your Facebook status, you can now send a message to 32665 (or your “Facebook” contact) using Siri. Again, it’s super simple. Facebook and Twitter will not charge you for this service. Obviously, you’ll still be charged by your mobile carrier for sending the SMS messages.