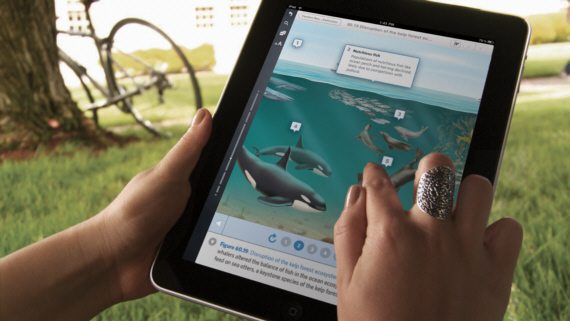 Last week, Apple sent out invitations for a New York-based media event set to take place on January 19th. They read: “Join us for an education announcement in the Big Apple.” But what could Apple be announcing?

As The Wall Street Journal points out, the iPad was originally pitched as a device that would transform the classroom experience — a promise that has yet to materialize. But that could change this Thursday…

The WSJ has learned that Apple is working closely with major textbook publisher McGraw-Hill on whatever it is that the company is planning on announcing this week. All signs point to a new breed of digital textbooks.

“McGraw-Hill has been working with Apple on its announcement since June, a person familiar with the matter said. It wasn’t known whether Pearson and Houghton Mifflin also would participate. Cengage Learning, one of the world’s largest high-education publishers, has partnered with Apple in the past and will be attending the event. The company declined to say what its role is in Apple’s announcement this week.”

In addition to the WSJ report, Ars Technica has heard that Apple also plans to unveil a set of interactive eBook creation tools at this week’s event. The suite is expected to be something of a “GarageBand for eBooks,” so to speak. Interesting.

This would make it easier for both publishers and educators to put together interactive iPad-based textbooks and lesson plans for students. Several schools are already experimenting with Apple’s tablet as a replacement for conventional textbooks.

It was well-known that both Steve Jobs and his wife Laurene were very passionate about education. Jobs even told his biographer Walter Issacson that the textbook was one of the three things he wanted to transform (along with TV and photography). Perhaps we’ll get a glimpse of Jobs’ vision this Thursday.

Regardless, this week’s Apple event just got a little bit more interesting.