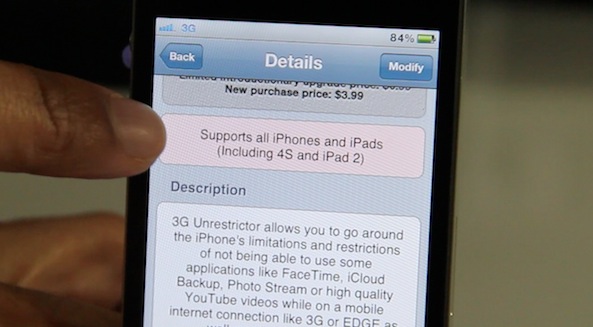 Need more proof that the iPhone 4S jailbreak is right round the corner? Then look no further than 3G Unrestrictor 5, the first tweak to our knowledge that outright claims support for the iPhone 4S and iPad 2 on its Cydia page.

3G Unrestrictor is a tweak that enables FaceTime calls and high quality YouTube streams over 3G. Its latest update brings iCloud Backups, and Photo Stream to the world of 3G as well.

It’s on sale for a limited time for $0.99 (existing customers), so if you think you’re going to need its services, especially on your newly jailbroken iPhone 4S, you might want to take a look inside.

3G Unrestrictor is best known for allowing FaceTime calls via 3G, and it’ll probably continue to be known for that. Somehow I don’t see too many people taking advantage of 3G iCloud backups when 3G data limits exists, but I guess it’s nice to have the option just in case you need it in a jam.

Perhaps the biggest news surrounding this upgrade to 3G Unrestrictor — besides its cool introductory price — is the fact that it openly says that it supports Apple’s A5 devices. If that doesn’t get you excited for the upcoming jailbreak, I don’t know what will.

Update: The $0.99 price is for existing customers. All other customers will have to pay $3.99. Sorry about any confusion.