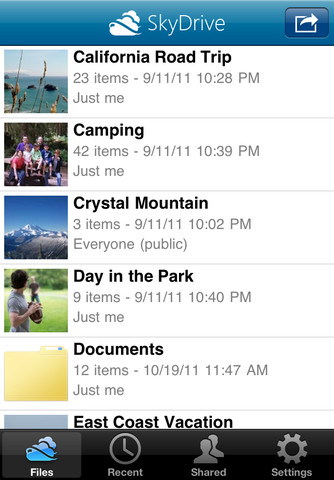 Users of Microsoft’s popular cloud storage service SkyDrive will be happy to hear that the company has finally brought an official client to the iOS platform.

Microsoft has been on a bit of a roll over the past week, releasing multiple iOS applications, including an official Xbox Live app and the lovable Kinectimals game. Now onto the SkyDrive app…

“SkyDrive from Microsoft is the place to store your files so you can access them from virtually any device. With SkyDrive for the iPhone, you can now easily access, manage and share files on the go. You can also upload photos or videos from your iPhone to SkyDrive.”

SkyDrive is actually a viable alternative to the other popular cloud storage services. It provides users with a staggering 25GB of free space (compared to just 5GB from iCloud) and can be accessed by phone, computer, and even the company’s Xbox 360 console.

If you want to check out the SkyDrive for iPhone app, you can download it for free from the App Store.