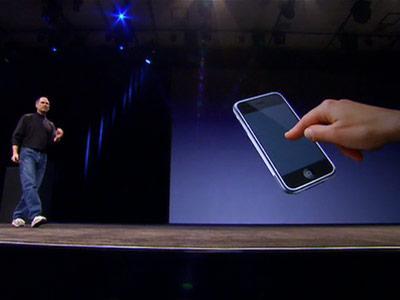 Patent applications are published every day by the United States Patent and Trademark Office, but perhaps none of them are more interesting than those from Apple. The filings give us a glimpse inside the company’s notoriously-private research and development labs.

PatentlyApple reports today that another batch of applications has just surfaced on the USTPO site bearing Apple’s name. While most of the inventions look intriguing, there’s one in particular that stands out above the others. And it involves powerful, new touch gestures… 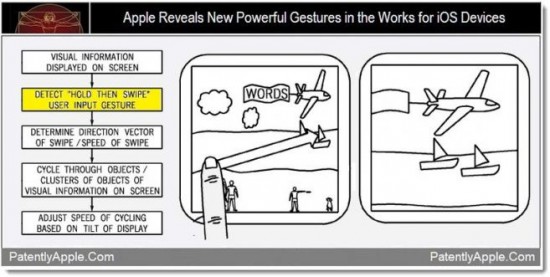 The document describes a series of new touch input methods that, among other things, make it easier for users to explore content in greater detail. The methods seem to be directed at device’s with smaller screen sizes, where multi-touch gestures might not work.

“In one example, a user may perform a “swipe then hold” touch input gesture, leaving a finger on the display screen of the electronic device. The electronic device then may pan and zoom onto any objects along a direction vector of the user’s swipe gesture or, more generally, along a directional path associated with the user’s swipe gesture. The user may vary the speed and/or direction of such cycling by moving the finger to the left or to the right and/or by tilting the orientation of the display screen.”

There are even mentions in the filing of using the hold and swipe gestures to perform iPhoto-like image searches:

“When a user selects a particular person’s face in an image and performs the touch input gesture, the electronic device may begin to automatically cycle through other images that also contain the face of the identified person.”

PatentlyApple also suggests that these modified gestures could have something to do with Apple’s recent C3 purchase. The 3D mapping company is known for its highly-detailed imagery, and pinch-to-zoom may not be a practical method for users to explore them in detail.

We’ve seen several Apple patents regarding different input methods over the years, but it doesn’t mean that any of them are going to turn up in consumer products. These hold and swipe gestures, however, seem practical enough to make their way into future iDevices.