One of the things Apple is most known for is its innovation. They haven’t reinvented the wheel with any of their products, they’ve just made the wheel sexy and easy to use. Patents are a good resource for information on Apple’s past and future innovations. Although patents don’t always make it to the assembly line, they do shed some light on what Apple’s been working on.

Patently Apple is an expert at keeping up with Apple’s latest ideas. After the U.S. Patent and Trademark Office (USPT) makes Apple’s patent filings public, Patently Apple posts them on their website with a pretty good break down of all the tech talk. Their latest gossip is on a filing from late 2009 by the Cupertino company, concerning a “Smart Bezel.” I know it sounds unusual, but Apple is looking to completely change how we interact with our devices…

The documents suggest that Apple has been doing research with interactive electroluminescence displays for their iOS devices. The bezel would be considered a “secondary display,” and would be touch-sensitive. These displays could be used for indicators for things like new text messages or missed calls.

The smart bezel would not only provide notifications but could provide users with an alternative input method. I’m not guessing a keyboard by any means, but think shortcuts. Patently Apple even suggests that developers would have access to this interactive display and would be able to draw their own icons for their apps. Apple even suggests that users would have the ability to completely disable the 2nd display if desired. 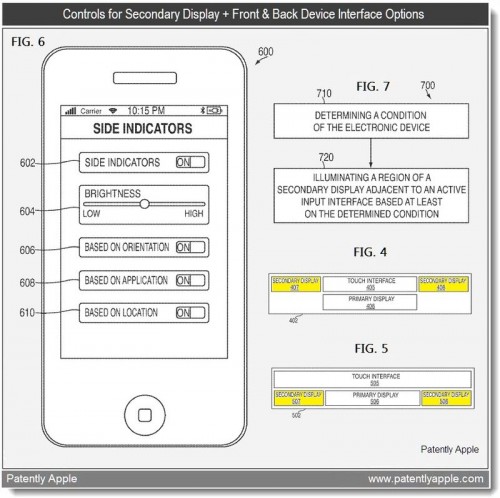 The patent goes on to talk about an illuminated home button. Essentially a capacitive button that doesn’t appear until your finger approaches it. This falls in line with recent rumors that Apple is ditching a physical home button for a touch-sensitive one.

It looks like interesting research, but I don’t know if Apple would implement this into their products. Seems like it would add complexity to a simple device. Keep in mind that even if a company doesn’t like an idea, they will patent their research to keep competition from using it in their products. But I’m certainly no expert, there’s no telling what they’ve got cooking up in that Cupertino campus.

What do you think of a smart bezel?