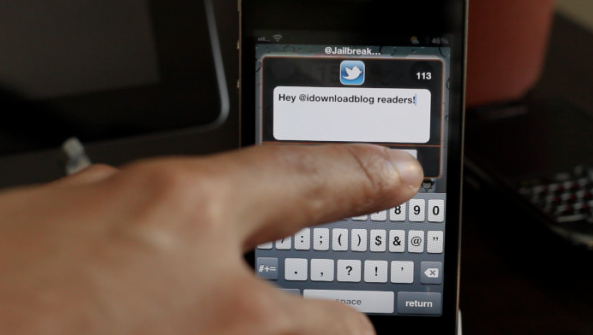 With Twitter becoming the world’s water cooler, everyone is scrambling to integrate the social network into their software and hardware, with Apple being no exception.

When iOS 5 ships to eager users later this year, it will have Twitter baked right into its core, with contact syncing as the only real feature to be yet demonstrated by Apple.

What we really want from iOS 5 Twitter integration is system-wide tweeting. Being able to send new tweets without having to stop what you are doing would be really cool, though we’re not holding out much hope that Apple will give it to us.

Once again though, the jailbreak scene has us covered, with TwitkaFly doing the business this time around…

Available now from the jailbreak app store, Cydia, TwitkaFly will set you back $1.99.

So what do you get for your money?

The most obvious feature is the ability to create an Activator action that will trigger a bubble to pop up, offering users a chance to tweet from anywhere in the operating system – in an app, in a game, anywhere.

Perhaps the best feature, though, brings BiteSMS-like quick-reply functionality to the table, meaning pushed @ messages can be dealt with instantly.

We like TwitkaFly so much that we’ve put together a video showing it off, so hit the play button and enjoy.

To use TwitkaFly you’ll need to have the official Twitter app installed, as well as be running a jailbroken version of iOS 4.x or above. There is no iOS 5 support just yet, either. We suggest using JailbreakMe as your tool of choice, should you not already be part of the cool gang.

Have you tried TwitkaFly yet?