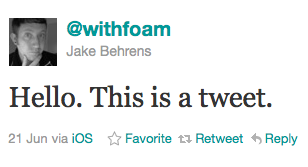 We already know that iOS 5 will bring deep Twitter integration to iDevices. So far, we’ve confirmed that iOS 5 will let you tweet pictures from the Photos app, your location from the Maps app, and a link from Safari or the YouTube application.

While we don’t have any hard evidence confirming this information so far, we want to point you to a tweet that Jake Behrens, a developer for Apple, sent out yesterday. Do you see anything special in there?

With today’s news that Cupertino might be looking into letting developers create widgets for iOS 5, I wouldn’t be surprised if Apple and Twitter were testing a new widget that would allow users to tweet from anywhere in iOS 5, just like qTweeter currently does for jailbreakers.

I predict that the Twitter integration in iOS 5 will be even deeper than we previously thought. Who’s not excited about that?