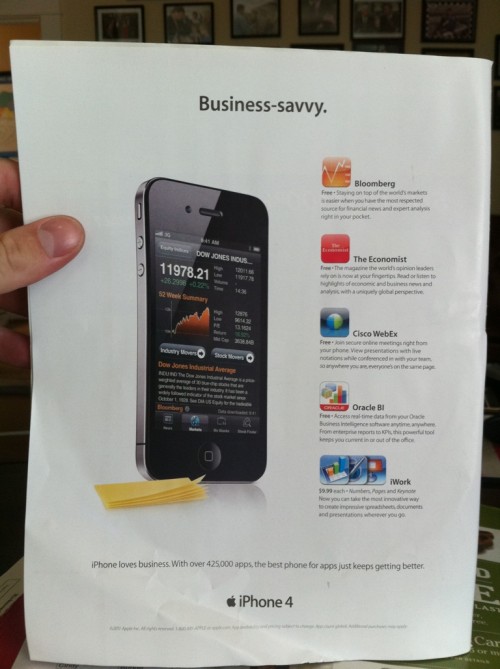 There were 2 major arenas that RIM had all to itself for the better part of a decade, and that was the government and enterprise users. And why wouldn’t they? BlackBerries were secure and had a solid email system- it seemed like a no-brainer.

It looks like years of falling behind the curve, among other mistakes, have cost RIM their place at the top in those 2 markets. We’ve already seen the U.S. government drop their aging BlackBerries in favor of iPhones, and now it looks like Apple is prepared to move onto the enterprise space…

MacRumors brings us this photo of an iPhone ad on the back page of The Economist, a publication they describe as a very influential business magazine. The ad is labeled “Business-savvy,” and touts several business apps, including Bloomberg and Oracle Business Indicators.

The iPhone has made serious progress with the enterprise crowd over the last few years. Apple COO Tim Cook noted in their last quarterly earnings call that 88% of Fortune 500 companies are using iPhones in some capacity and 75% of them are deploying iPads.

While those are some huge numbers, they obviously don’t represent the rest of the enterprise market. Apple still has some growth to do, and with their competitor RIM just trying to stay afloat among mass layoffs and other restructuring, Steve Jobs and company seem to be moving in for the kill.

What kind of phones does your company use? BlackBerry, iPhone?