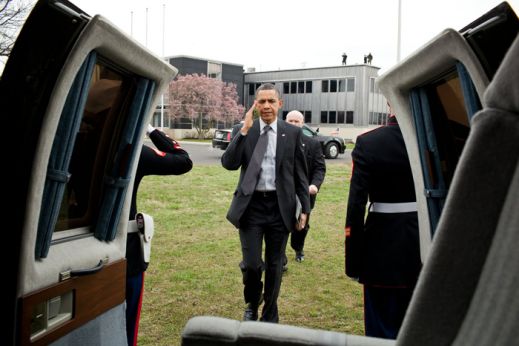 United States federal agencies are ditching BlackBerry devices in favor of those powered by iOS, according to a new feature in the Washington Post. Dubbed ‘federal government 2.0’, the change will see the U.S. government upgraded and the introduction of consumer technologies like the iPhone, iPad, and Google’s Gmail service.

The demand for these technologies has not only come from agency directors and senior officials – who want to use iPads, Android phones and web-based email at the office like they do at home – but also from frontline workers who believe consumer technologies can set them free of the office for mobile working arrangements…

This is not a movie. This is not a Steve Jobs dream. This is the federal government 2.0, where technology upgrades no longer come at a “Little House on the Prairie” pace. Even President Obama, a BlackBerry devotee, has upgraded. He now owns an iPad, and it has been seen on his desk and under his arm.

The flashy consumer products that have been adopted in the corporate workforce — upending BlackBerrys for iPhones, Microsoft Outlook for Gmail, and lately laptops for iPads — are now invading the federal government. The State Department. The Army. The Department of Veterans Affairs. NASA. The General Services Administration is in the process of moving 17,000 employees onto Gmail.

Of course, happy workers are more productive workers, and with free services like Gmail moving in to replace those that currently exist, there is also money to be saved.

With about around 50 iPads and iPhone already in use – expected to rise to 100 soon – the Bureau of Alcohol, Tobacco, Firearms and Explosions can now watch the “bad guys” with video surveillance equipment and an iOS device.

And there are others area of the government where iOS devices are already in use: the U.S. State Department is testing the iPad, while Congress allows iPads and iPhone to be used on the house floor, and the Department of Veteran Affairs will soon provide clinicians with a choice of an iPad or iPhone instead of the BlackBerry.

With corporate workforces and now the federal government scrambling to adopt Apple devices, this can only be bad news for BlackBerry maker Research in Motion. AppleInsider notes that BlackBerry devices have long been a cornerstone for the U.S. government, but RIM continues to fall behind with support for third-party software whereas rivals such as Apple’s App Store and Google’s Android Market have been rapidly increasing.