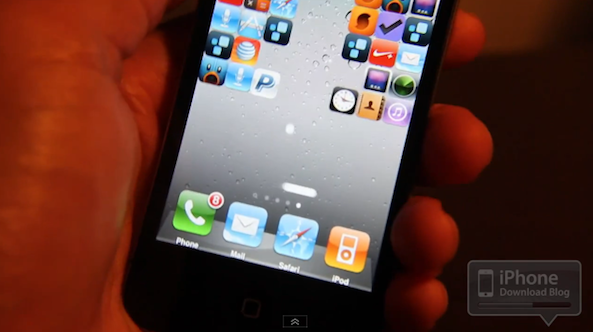 Few arcade games are as easily recognizable and ubiquitous as Breakout. That’s why it’s only appropriate that along with a Space Invaders remake, a Breakout remake graces the iPhone’s SpringBoard in the form of a jailbreak tweak.

That tweak is called SpringBlock Breaker, and it allows you to play a remixed version of Breakout using some strategically placed app icons, and the iPhone’s accelerometer.

Is this entry as interesting as SpringBoard Invaders? Check inside for the answer…

In a nutshell I think that SpringBlock Breaker plays a lot better than the Space Invaders inspired SpringBoard game that came before it.

The accelerometer based control works a lot better with this game’s paddle, and the fact that you don’t have to constantly tap the screen in order to shoot, makes for a much less hectic experience.

Still, if you’re really into it for the gaming aspect, you’d probably be better off just going with one of the many Breakout clones available on the App Store. You’ll end up paying the same price for a much-better gaming experience.

On the other hand, if it’s the coolness factor that you’re looking for; if you’re looking to show off to your friends, this is an excellent jailbreak tweak to do so.

SpringBlock Breaker can be purchased on Cydia for the bizarre price of $0.98. Have you tried it out yet?