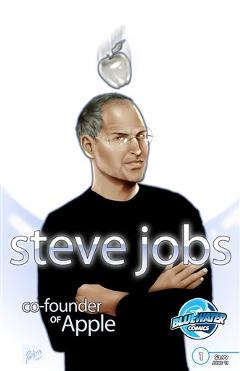 It seems we just can’t get enough of Apple CEO and co-founder, Steve Jobs. With an authorized biography – titled iSteve: The Book of Jobs – due for release early next year, it seems one comic book company thought the book might not have enough pictures in it, so they’re making their own.

‘Steve Jobs: Co-founder of Apple‘ will chronicle the life and business dealings of the world’s most iconic CEO in comic book form, with the book being the latest in a series which covered the likes of Sarah Palin and Mark Zuckerberg….

According to the Associated Press, the book, written by C.W. Cooke and drawn by Chris Schmidt, explores the live of Jobs and covers the founding and subsequent rescuing of his beloved Apple – presumably in glorious technicolor.

Jobs co-founded Apple with long-time friend and computer wizard Steve Wozniak, but was forced out of the company during a power struggle in 1985. His triumphant return in 1997 is widely regarded as the turning point for a then struggling Apple. Many groundbreaking products later – including the iPad, iPod and iPhone – and Apple is sitting pretty atop a mountain of cash. Not bad for a college dropout.

A similar book on Facebook founder and CEO Mark Zuckerberg sold out, prompting Bluewater Productions to explorer the possibility of books on other contemporary figures with Jobs top of the list.

“Admire him or hate him, Jobs’ vision and business acumen revolutionized the world,” Cooke said. Between Jobs and Microsoft founder Bill Gates, “you would be hard pressed to find someone with greater influence over how we communicate, interact and do business over the last 30 years.”

Steve Jobs: Co-founder of Apple will go on sale in book stores, comic shops as well as online from August 24th.

Will you be picking up a copy?