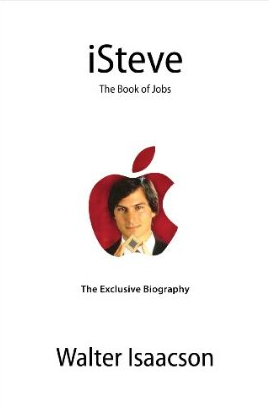 If there’s one thing us geeks like more than a celebrity CEO, it’s a book about one. With that in mind it’s perhaps not a great surprise that the biography of Steve Jobs is already a Bestseller across multiple categories for Amazon – and it’s not even out yet.

Unimaginatively titled ‘iSteve‘, the book currently holds the top spot in the technology, biography & history and business categories on Amazon.com, with the Walter Isaacson work sitting in 29th place in the top 100 books on the site…

That’s an impressive accomplishment for a book that doesn’t even hit shelves until March of 2012, and one that it could be said should be a niche product.

Priced at $18 (list price of $30), iSteve: The Book of Jobs follows the life of Apple’s co-founder and prodigal CEO’s private and business life with unprecedented access to the man himself as well as those closest to him both at home and at Apple.

From bestselling author Walter Isaacson comes the landmark biography of Apple co-founder Steve Jobs. In iSteve: The Book of Jobs, Isaacson provides an extraordinary account of Jobs’ professional and personal life. Drawn from three years of exclusive and unprecedented interviews Isaacson has conducted with Jobs as well as extensive interviews with Jobs’ family members, key colleagues from Apple and its competitors, iSteve is the definitive portrait of the greatest innovator of his generation.

Previous books on Steve Jobs such as ‘iCon‘ and ‘Inside Steve’s Brain‘ have sold well, but this effort penned by the same man who wrote the biographies of Kissinger and Benjamin Franklin could potentially blow them both all out of the water if sales continue at their current breakneck pace.

We can’t help but wonder if there’s some juicy WWDC gossip in the book – could be a little obsessed?

Have you pre-ordered yet?