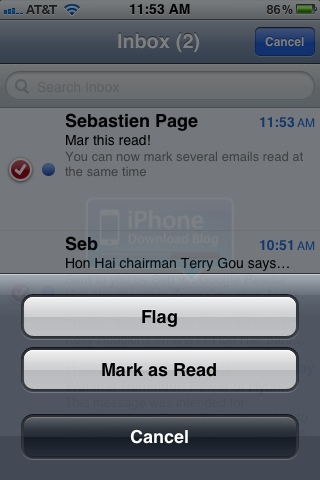 This is not the right time to be a jailbreak tweak developer. As we had clearly predicted, Apple is going after all those little jailbreak tweaks and are now implementing them in iOS 5. The latest one to date is the ability to mark several emails as read at the same time.

If you go to your inbox, hit the Edit button, select several messages, and tap “Mark”, you are given the option to either flag those emails, or mark them as read…

This is a direct response to the “Mark Read” jailbreak tweak we covered a few months ago. Unlike Apple new iOS feature, Mark Read allows you to select all your emails at the same time. You will still have to select them one by one in iOS 5.