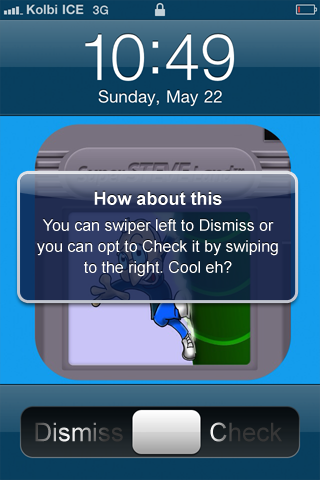 iOS 5 is right around the corner, and there’s plenty of speculation taking place over what Apple will do with the next major version of their mobile OS.

We’ve shown you plenty of concepts for iOS, including different styles of push notifications and voice integration. Concepts are interesting, as they show potential for how Apple could reinvent parts of the iOS interface with its upcoming preview at WWDC…

This particular concept, by @macnavs, takes an interesting approach to push notifications on the iPhone’s lockscreen. The classic ‘slide to unlock’ bar would be used as a tool for either dismissing or viewing notifications.

The grey slider would be placed in the center of the ‘slide to unlock’ bar, instead of on the far left. Sliding to the left would dismiss a notification, while sliding to the right would “check” it. Sounds pretty clean and simple. However, Apple probably won’t implement this type of design in iOS 5.

These concepts are nice because they make you think about what could be done in iOS. They are by no means an indication of future features that Apple plans to implement.