Cloud services have been all the rage lately. Offerings from Amazon and now Google are currently battling it out in the “clouds,” but I’ve got another suggestion for you. This one might have flown under your radar because it’s just an App Store app that syncs with your DropBox account.

BoxyTunes isn’t a brand new application, but we figured with all of the hubbub surrounding cloud services these days, we wanted to make sure all of our readers knew about this little gem…

If you have a DropBox account and are looking for an easy way to listen to music on your iDevice without bogging down its hard drive, you should take a peek at BoxyTunes. The application syncs up to your DropBox folder and locates MP3, AAC, WAV and a host of other music files. 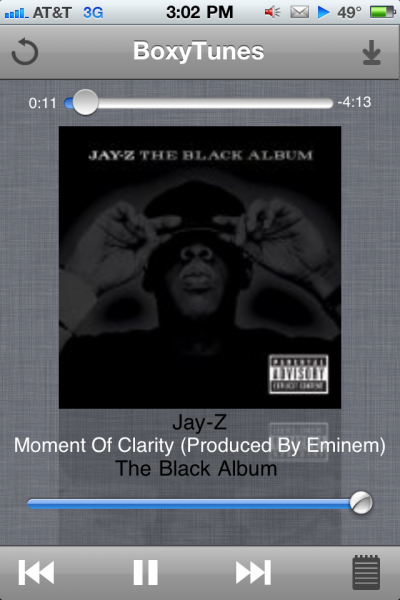 The app then loads the music files into a playlist which can be customized if you wanted to reorganize your tracks. The music can be controlled via the in-app music player, as well as using the multitask bar and lock screen controls.

DropBox uploads [to me] seem fairly speedy, and the same goes for loading tracks into the BoxyTunes application. The nice thing is that the files stay on your device until you delete them. So once tracks are initially loaded into the app, you don’t need an internet connection to listen to them.

I like this app because I have a free 2GB DropBox account, but folks looking to stream larger music libraries should know DropBox offers 50GB for only $9.99 a month. You can grab BoxyTunes in the App Store for free, or pay $0.99 for some extra features like album art and AirPlay compatibility.

Have you used BoxyTunes? What do you think?