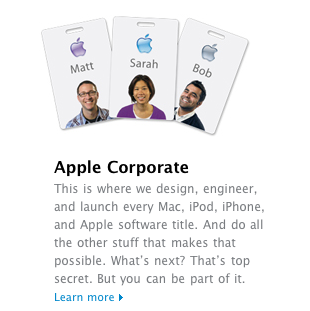 We’ve reported about the rumored MobileMe revamp and possible digital locker feature multiple times. It looks like if you are really concerned with what Apple’s new cloud-based services will look like, you can go give them your input first hand.

This afternoon, a BGR reader spotted an Apple job listing requesting a Cloud Systems Software Engineer. The position is for a spot on a small team of programmers looking to form the foundation of new Apple products and services…

Originally we thought that the new MobileMe with cloud-based digital locker services would be announced some time this month, but the live job posting suggests it may still be in early stages.

Explore the far reaches of the possible by joining the team building the future of cloud services at Apple!

Consider joining a small team writing the software which forms the foundation for some of our most exciting new products and services. We are looking for an extremely capable engineer who has a strong background in web services development, and who has built high-performance, scalable, and extensible systems. In this highly visible position, the successful candidate will collaborate with cross-functional engineering teams to define and implement some of the core backend platform frameworks and systems that will power next generation Apple web services.

It looks like Apple is looking to make good use of those 12 Petabytes they recently ordered. While it’s obvious Apple has some sort of new cloud-based services coming, the questions “what?” and “when?” still remain. I’m hoping we see a MobileMe revamp with cloud-based storage and better iOS integration.

What do you hope Apple’s new cloud-based services entail?