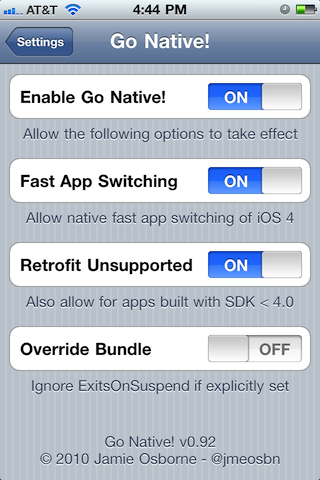 By now, there’s absolutely no excuse for an app not to support Fast App Switching, the iPhone’s form of multitasking. It’s been about six months since iOS 4 appeared on the scene, an update in which we finally received native multitasking on our iPhones.

Understandably, not all of our apps flew out of the gate with multitasking support built in; slowly but surely, they were updated to add support for such a critical feature. Sadly, there remain apps that have been neglected; apps that have yet to taste the sweet nectar of multitasking.

This is where jailbreaking comes in handy. Jailbreak apps like Backgrounder have provided an incredible workaround for these neglected apps. Go Native! adds yet another option to the playing field, but can it compete with Backgrounder?

While Backgrounder is much more robust and feature-rich when compared with this tweak, you can’t knock the simplicity of Go Native! If all you need is to enable Fast App Switching for an old app that you still find useful, it will likely suit your needs.

Keep in mind though, that unlike Backgrounder, it’s “all or nothing” with Go Native! This means that you can’t single out specific apps to enable multitasking for; if you turn it on, it impacts all apps.

Another thing to keep in mind is that if you want to play a music app in the background, and it hasn’t been updated to support the right API, your only alternative is real multitasking mode with Backgrounder. 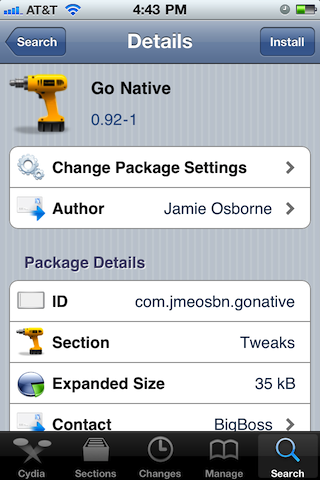 Personally, due to its depth, I’m sticking with Backgrounder for my extracurricular multitasking needs. Both Backgrounder and Go Native! require jailbroken iPhones, and can be downloaded from Cydia for free.

Is the iPhone’s native multitasking enough to satisfy you, or do you still find yourself relying on jailbreak solutions?