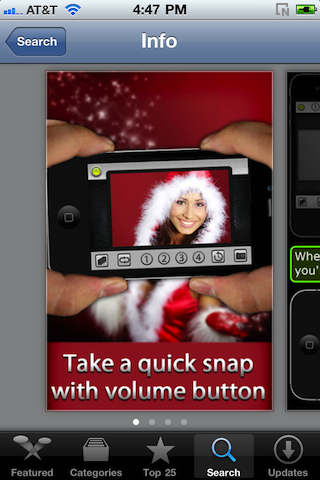 A mere 8 days prior to Camera+ making its way back to the App Store after many months of banishment, a similar app up to the same old trick has made its way into the iPhone’s ecosystem.

Surely the developers of Quick Snap have to know by now that using physical volume buttons for anything but volume can earn their app a lengthy timeout, but seeing as this is such a brash move in light of the recent events, we’re going to have to side with the developer and claim ignorance… 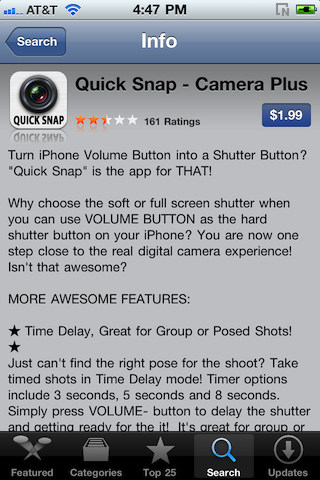 Besides the ban-worthy features, Quick Snap does feature a number of other interesting things such as time delay…hmm, yeah… Come for the volume button shutter, stay for the time delay. At least Camera+ was a decent app in itself when it tried to play slick with Apple.

On second thought, I take back that ignorance claim; this looks like nothing more than a quick cash-in for those desperate for a physical way to shoot photos.

If you refuse to jailbreak and use a great tweak like SnapTap, and you’re absolutely desperate for a physical shutter button, then give Quick Snap a try. But act fast, at $1.99 on the App Store, it won’t last.

No, seriously. When word gets back to Steve, it’s not gonna last.