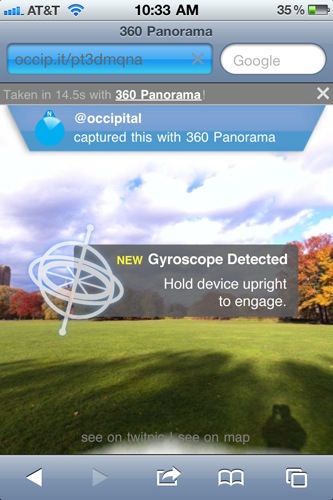 The iPhone 4’s gyroscope is one of the more underused features of Apple’s flagship iOS device, so it’s nice to see developers like Occipital — creator of the iPhone app 360 Panorama — put the technology to good use.

During the development of 360 Panorama, the crew uncovered the ability to control Mobile Safari using nothing more than the iPhone’s gyroscope. Want to give it a test spin? Check out the link inside…

For those of you who aren’t sold, they’ve graciously set up a demo site of sorts to test out the gyroscope-driven panoramic goodness.

I wouldn’t exactly label it as augmented reality, as it’s still a static photo that you’re actually viewing, but it’s quite cool nonetheless.

The only caveat is that you must be on iOS firmware 4.2 or higher in order for Safari to detect the gyroscope.

If the demo proves to be convincing, 360 Panorama can be purchased from the App Store for $0.99 cents.

What do you think, is gyroscope browsing the way of the future?