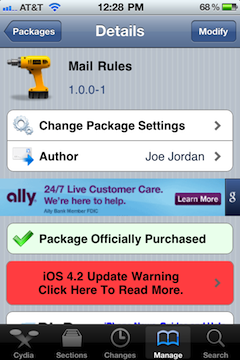 Since I’m a Gmail user, all of my email is already organized on Google’s servers before hitting my iPhone. This is done by means of filters, which are essentially rules in Outlook-speak.

Rules have been noticeably absent from the iPhone’s cache of email features, but that’s probably because most people have setups like I do, meaning that their email is sorted and filtered prior to being downloaded to the iPhone.

For those of you that don’t have this luxury, Mail Rules — a jailbreak tweak for iOS 3.2 and up — aims to fill in the gaps. But does the tweak’s shortcomings rule it out?

Let me answer that by saying that I could not get Mail Rules to function correctly on my iPhone 4. I even disabled all of the other jailbreak tweaks I had running at the time to ensure of no interference. Thankfully, I have access to a second iPhone 4, and I tried it there. Sadly, it still didn’t work. 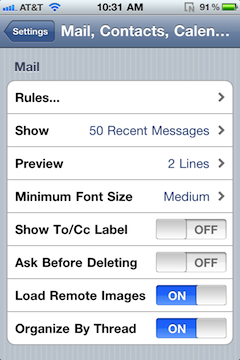 Mail Rules adds a “Rules” section under your normal mail, contacts, and calendars section in your settings app. This means that it’s tightly integrated with the existing UI, and looks like a normal part of the iPhone’s functionality. From here you are able to add a new rule, giving it a specific name, and setting some of its trigger options.

This is about as far as I could get, because as soon as I try to add a condition or an action, the tweak hangs, followed by an immediate crash. I haven’t been able to see what the condition or actions screens even look like thus far, because of this ongoing problem. 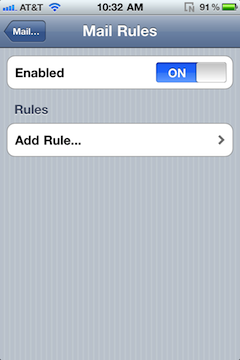 I think it’s safe to say that until an update gets released, I’d recommend against shelling out $1.99 for this tweak. I went above and beyond the normal call of duty to try to get it to work, and still nothing.

If and when the tweak does get updated and fixed, we’ll update this article. Again, you will need a jailbroken iPhone to purchase and download Mail Rules from Cydia.

Have you tried Mail Rules, and have you been able to get it working?

UPDATE: As expected, Mail Rules has been updated, and it no longer crashes like we reported above. The conditions and actions allow you to manage your iPhone’s email in a much tighter fashion. Some of the actions allow the messages to be automatically marked as read if they meet certain criteria, which is an excellent function to have.

I’d definitely say check out Mail Rules now that they have ironed out the bugs, especially if you receive a lot of email that isn’t already pre-filtered on the server side of the equation.