Chalk this up as likely one of the most obvious revelations to come out this week: AirPlay will be improved in the future.

On Sunday, Steve Jobs reportedly confirmed by e-mail that AirPlay would be receiving a few essential upgrades in 2011, including direct streaming from Safari and one additional feature that us iPhone users might find handy… 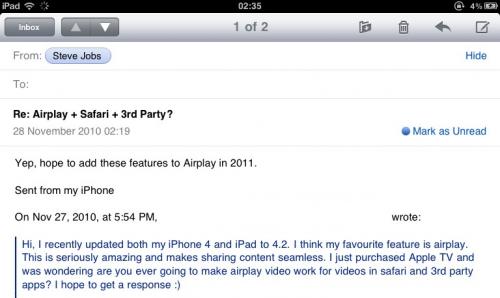 Of course that “one additional feature” is 3rd party app support built into iOS itself. In the meantime, it is possible to stream video from 3rd party apps with the recently released jailbreak tweak entitled, AirVideoEnabler.

Hopefully the update to AirPlay will include other useful features like streaming videos shot directly on the iPhone, as the article from MacRumors suggests.

Are you looking forward to these updates, or has your curiosity already been satisfied with the various workarounds found on on Cydia? Let us know below.