The iPhone has significantly improved in nearly every facet since its initial release. The camera’s improved, the interface has gotten better, organization has been stepped up. Really, I could go on for the next half an hour, it’s just that much of a refined experience.

But you know what they say, the biggest room is the room for improvement! Hence, we’ve compiled a list of 5 features that could ultimately make the iPhone a much more user friendly and functional device…

I can’t tell you how many times I’ve completely forgotten about an app I purchased in the past. Sure, I can go into iTunes on my Mac, login to my account, pull up a cumbersome list, and finally access my purchase history, page by page. Bleh! Slow, painful, and overall annoying. Why not just have a section in the App Store that has a quick and comprehensive list of all of your previous purchases? That way you can quickly go back and re-download anything you may have purchased in the past.

4. A real list of the latest App Store goods 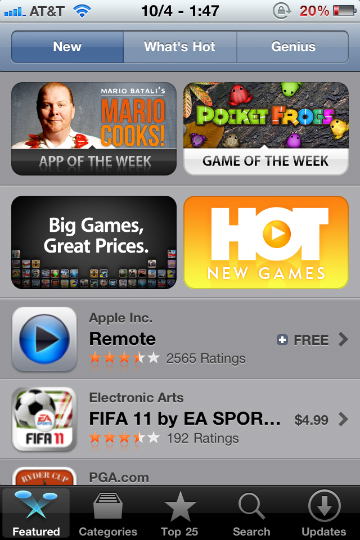 The “New” section on the App Store is a tad misleading. Sure, those apps have been recently released, but what about the hundreds of other apps that are release in-between the section’s weekly updates? There’s really no way you can see exactly what’s been released unless you do a search and happen to know precisely what you’re looking for. Developers and consumers deserve better.

I understand that Apple may not want a feature like annotation competing with its iBooks store purchases, but hear me out. When PDF users are forced to adopt one of several third party apps strictly to handle their annotation needs, it diverts attention away from iBooks.

If anything, I think implementing this feature directly in iBooks would boost the popularity of the homegrown app, which would simultaneously increase the visibility of the iBooks store. Brilliant! In the end, PDF users are going to find a solution that works for them, whether it’s with iBooks or not; so, why not go ahead a capitalize on some added visibility?

How many times have you been peacefully in the middle of watching a movie, playing a game, sending a text, or virtually anything else, when: BLAM!  A push notification alerts you that beshrewed is the word of the day, that Jane farmed 100 gold, or that local police have found that missing puppy they’ve been looking for since last week.

Don’t get me wrong, I’m all for these types of optional notifications, if they weren’t so incredibly obtrusive.  Push notifications shouldn’t hinder your progress at all.  They should work in a way where it’s easy to know that you got an alert, without putting the breaks on whatever you were currently doing.

Isn’t it a pain to always have to enter your password whenever you want to purchase an app from the App Store or music from iTunes? I know I’m sick and tired of it. With this optional feature, all it would take is a quick flash of your mug, and voila, purchase completed! And since every iDevice from here on out will most likely come standard with a forward facing camera, it’s quite the feasible idea.

What would you add?

What do you think? Which of these features tops your list? Did we miss anything important? Sound off and let us know.