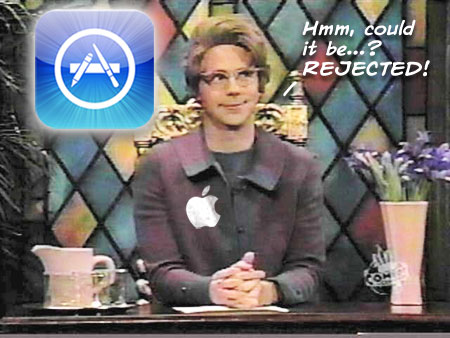 We were all dancing in the street while holding up our posters of the Apple hierarchy when the announcement that the rules and regulations had been altered to allow just about anything into the App Store, right? Certainly there is no reason to believe that apps from the past that were once denounced will likely be gracing the store soon. But is that all of it?

What did the regulation altering really say? Certainly a company the size of Apple would need to put specifics down to paper when changing something as influential as the App Store regulations. PC World shows us they certainly did write things down, in that evasive Apple tone that always leaves room for immediate alteration in policy.

The article derives from a summary written by Engadget’s own Nilay Patel entitled, “We don’t need any more fart apps”. That little declaration centers on the guideline that reads “Apps that duplicate apps already in the App Store may be rejected, particularly if there are many of them.” While that sounds good it certainly will add much more discretionary advisement to those responsible for allowing apps into the store.

The other Apple entry into their App Store guidelines that leaves the door open for questioning is “Apps which appear confusingly similar to an existing Apple product or advertising theme will be rejected.” and “Apps that look similar to apps bundled on the iPhone, including the App Store, iTunes Store, and iBookstore, will be rejected.”

Perhaps this little clause could be that which reaped ramifications on Camera+ and the removal of the app due to having the shutter button activated by the volume controls. While the app offered the ability without Apple noting they were planning on adding the feature, it isn’t hard to imagine Apple wanting to add it sooner or later.

Anyway you look at it this surely means positive things for the potential of the App Store. That being said it is never a blind subject when a company reduces the rules in favor of adding power to themselves as it relates to the process. We have seen time and time again that the discretion used by Apple’s staff hasn’t been nearly consistent as we would like.

What do you think? Are there are any reasons we should be concerned about the new process in which apps will be monitored? Give us all your fears in the therapy lounge known as the comment box below.