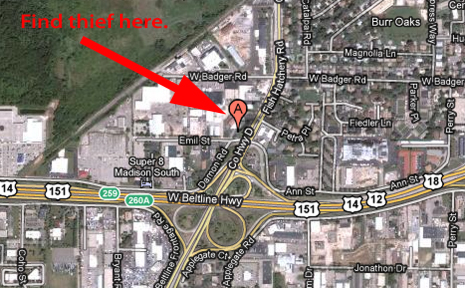 What is it lately with stupid criminals and the iPhone? This week alone iDB reported that a man left his device at the scene of robbery and another instance of a woman texting about her crimes from her beloved phone.

Today’s entry comes from my home state of Wisconsin. Madison police report that 19 year old Jamal Jackson heisted two iPhones from the local West Town Mall in the capital city. Both phones were armed with Apple’s MobileMe feature of Find My iPhone which led Jackson to be tracked to a nearby PDQ convenience store where he apparently stopped his van to gas up…

Madison police released the following statement regarding the apprehension of the novice thief:

The phones were showing up as blue dots on a computer screen. The officer saw the blue dots come to a rest in what appeared to be the lot of a PDQ store.

Eye witness description combined with the GPS tracking information from Find My iPhone led police directly to Jackson’s van, which after search yielded both of the stolen iPhones. Next time Jamal, gas up your get-a-way vehicle before you decide to rob someone. A crash course in the technology of the device wouldn’t hurt either.

Dare I ask, have you any thoughts?