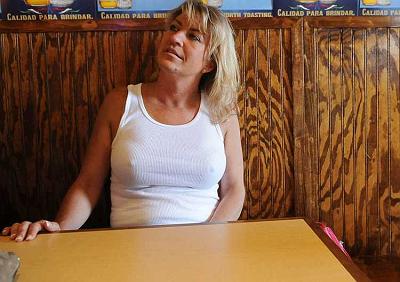 I love this story. A woman in Illinois is apparently furious at her local police department for confiscating her iPhone that houses multiple naked pictures of the former stripper. Her iPhone was seized as evidence relating to a criminal damage to property case that involved a car being keyed.

The now club owner, Bridget Polaski, is reported as saying the following to the Chicago Sun Times:

I’m just really upset about my pictures being all over the Internet, if that’s where they end up landing.

The stripper is afraid of her naked body being viewed by strangers. Did I mention that I love this story?

According to Polaski, she tried to file sexual harassment charges against the department but they refused to take her claim. Apparently when she was brought in to be questioned she overheard the police officers laughing it up over the fully nude photos. News flash hunny, laughing at your naked body isn’t a crime.

Romeoville officers say that Polaski will not be getting her iPhone back for several weeks or months. That being said Polaski vows to not give up her fight. Bridget says,

I will not give up. I’m tired of people messing with me, just because I’m blond and halfway decent looking.

Amen, sister. Do you think that she should be allowed to go and delete the photos in question? Does her being a former stripper with fake boobs have anything to do with the way the police are handling her? Give us you fully exposed opinions in the comments below.