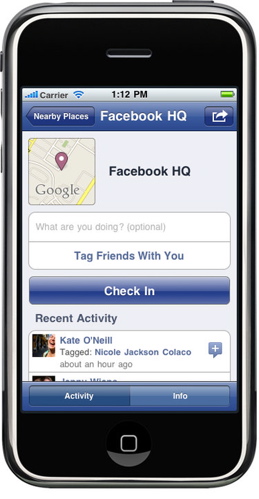 Late Wednesday evening, Facebook added a location check-in feature to their hugely popular iPhone app. “Places” is the official title, and the social media kingpin is expected to be the eventual champion of such (GPS) location based utilities.

Similar applications allow you to publicly announce your whereabouts, with Gowalla and Foursquare among the most popular. At least they were.

The Washington Post is among the seemingly endless sources that report once a user “Checks In”, their location is broadcasted on both their personal and public feed. Security adjustments can be made within your profile to change just how known your want your movements to be.

This seems certain to be a dagger to Foursquare and company, but Facebook’s approach doesn’t have the add-ons that other apps have. In Foursquare, you’re awarded various badges and even mayorships based on the frequency and uniqueness of your visits.

Places seems to simply announce your position to your friends, and shows your profile picture on a GPS map. Facebook allows you to ‘tag’ those you’re with (like with their photos) so others can follow where they are as well, though they need to authorize you to do such beforehand.

On the surface it all seems like an inevitability merely coming to fruition. My opinion is that this addition to the application spells trouble, and not the type related to the new-found competition of existing services. From my experience, many people are “friends” with individuals they barely know or have just met. For instance someone meets you at a party, and after talking for 10 minutes asks “Are you on Facebook“? And just like you’re mutually privy to each others profiles.

So will this kill Foursquare type apps? Or will the competition from the 500 million potential participants on Facebook just make them step their game up? Will you be participating or do you plan to keep your Places to yourself? We at iDB would love your opinion in the comment box on this important addition to the world’s largest social network.