Spotify for iPhone no longer indicates how to purchase an audiobook on the web to access through the app because of Apple and its unfair App Store rules. 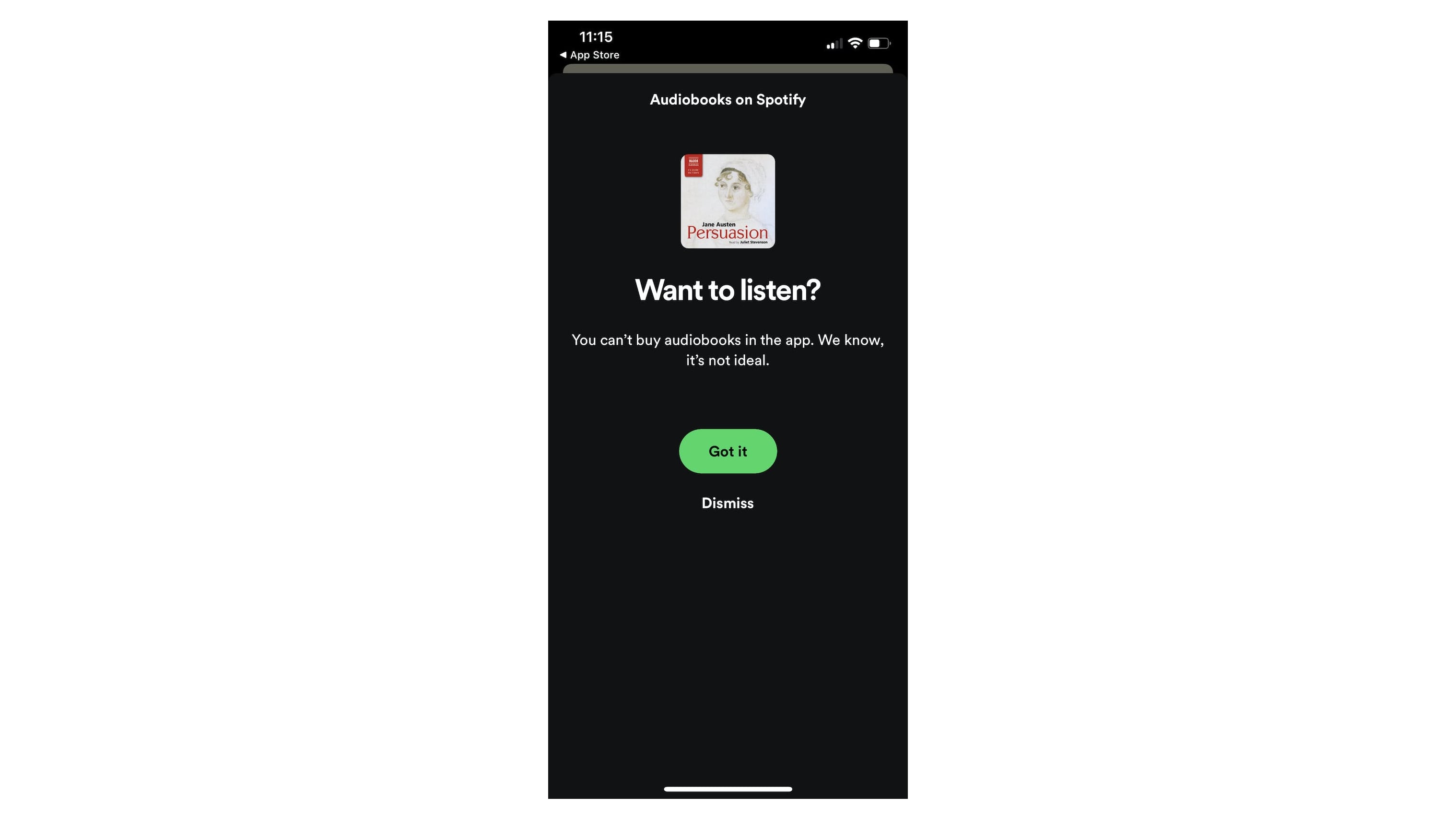 Can you purchase Spotify audiobooks in the iPhone app?

Apple told the press that it recently rejected an update to the Spotify app because it broke the App Store rule regarding explicit in-app communications directing users outside the app to make digital purchases. Spotify made the requested change by removing the aforementioned button in order to bring the app into compliance.

From Apple’s statement to The Verge:

We have no issue with reader apps adding audiobook content to their apps, linking users out to websites to sign up for services or communicating with customers externally about alternative purchase options.

So for what reason then did you reject Spotify’s update?

The Spotify app was rejected for not following the guidelines regarding including explicit in-app communications to direct users outside the app to make digital purchases.

Apple will always find an excuse for its behavior.

How things were before

Before, Spotify for iPhone would happily email you a link for the audiobook you wanted to buy. You would go to your inbox, open the email, click the underlying link and land on the Spotify website to complete the purchase. The purchased audiobook would instantly become available to view in the mobile app.

It’s a model simular to the Kindle app and others.

But Spotify has now removed this button. Instead, attempting to make an audiobook purchase results in a message saying, “Want to listen? You can’t buy audiobooks in the app. We know, it’s not ideal.” As The Verge reported today, the cryptic message doesn’t even mention that the user is free to buy the book on the web.

Our take: Greedy Apple is back at it again

Greedy Apple takes up to a 30 percent commission made in apps like Spotify. Under such an unfair business model, Spotify has little incentive to use Apple’s In-App Purchase system for in-app audiobook purchases.

This change is inevitably going to inconvenience Spotify listeners on iOS who would like to purchase audiobooks from within the app. So what exactkly is going on here?

Is Apple doing this out of spite, because Spotify dragged it to court and accused it of acting like a Big Brother with its App Store? Apple, too, sells audiobooks on the Books Store, which is available right from within the Books app. So why won’t Apple let me purchase audiobooks from withing the Spotify app in the same way?

No matter how you look at it, Spotify seems to have made this change because of Apple’s rules around audiobooks that Spotify claims are anti-competitive.

Wait, doesn’t Apple permit reader apps to provide a button to take the user to their website? The Netflix app even invites the user to “tap the link below to sign up”!

That’s true, Apple did relent to government pressure by permitting reader apps to link to the web to sign up and buy content. Apple’s definition of reader apps includes software that provides access to previously purchased content or content subscriptions for digital magazines, newspapers, books, audio, music and video.

“Basically, Apple rules mandate a cumbersome audiobooks purchasing process that makes it harder for you to find your next favorite author or book,” Spotify wrote on a webpage the company created to support its fight against Apple.