Some of the new macOS Ventura features include Stage Manager and Continuity Camera, which lets you use an iPhone as a webcam for your Mac. 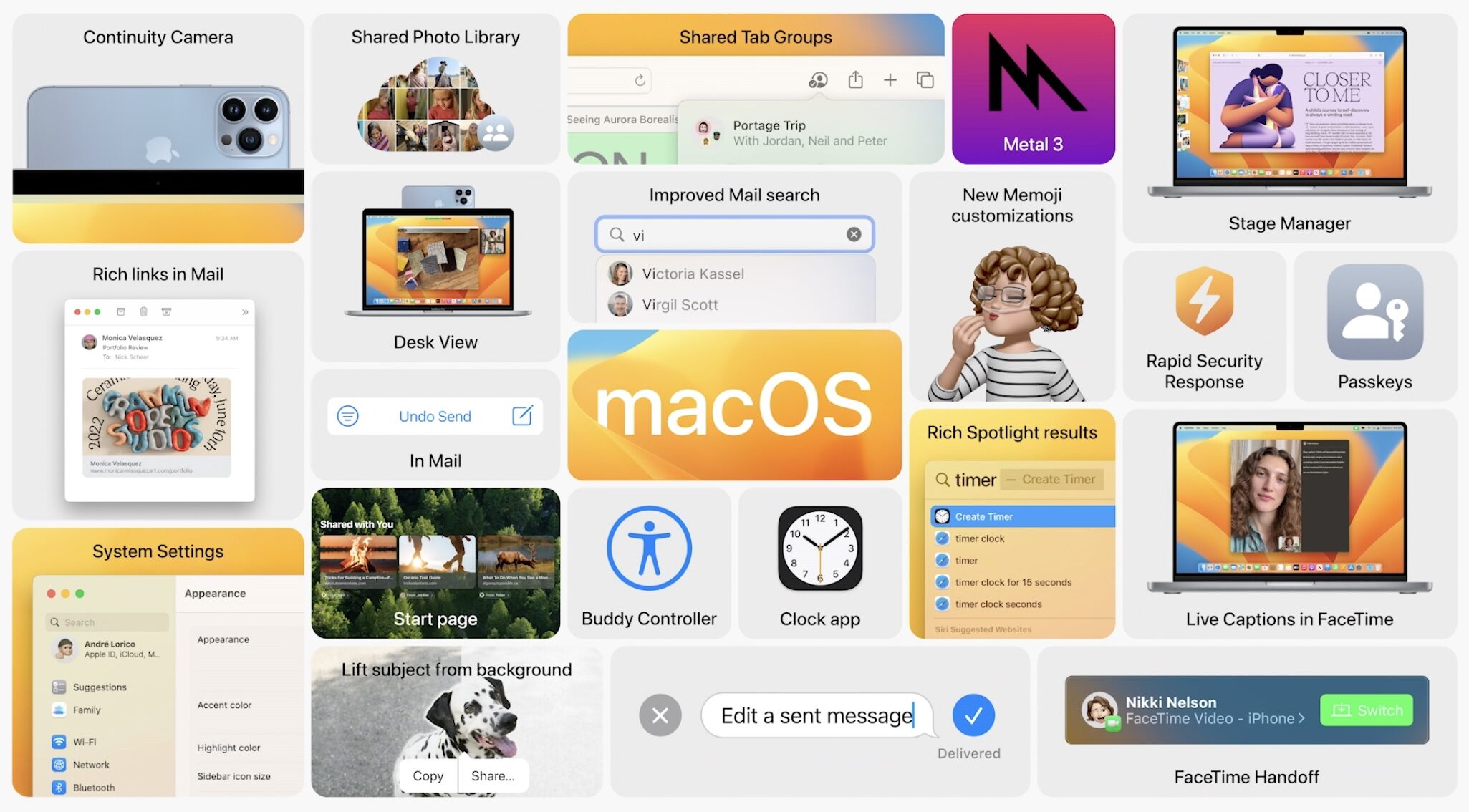 To install an over-the-air update, click the Apple menu and choose System Preferences, then click the Software Update icon. If you see macOS Ventura listed, click Update Now or Upgrade Now to download and install the update.

If you’re interested in the detailed security content of macOS Ventura and other Apple software updates, check out Apple’s support document.

For everything new in macOS 13, go to the macOS Ventura features overview page.

Continuity Camera: Use your iPhone as a Mac webcam

One of the more eye-catching new features in macOS Ventura is Continuity Camera, which lets you use the awesome camera on your iPhone as a webcam for your Mac.

Your computer can automatically recognize and use a nearby iPhone camera without the need to wake the phone. Continuity Camera supports Apple’s keystone imaging features like Center Stage, Portrait mode and Studio Lighting modes.

Another great feature of Continuity Camera is its ability to tap into the ultra-wide camera on your iPhone to bring you something called Desk View, which simultaneously shows your face and an overhead view of your desk.

The Desk View feature works like magic. It should be particularly awesome for creating DIY videos and showing off sketches over FaceTime.

Stage Manager steps onto the stage

Stage Manager wants to help keep all of your open windows organized, but the feature has been so buggy, counterintuitive and rough around the edges that Apple has had to delay iPadOS 16, which also features Stage Manager. The feature displays the window you’re working in prominently in the center, while other open windows appear on the lefthand side so you can quickly and easily switch between tasks.

You can also group windows together when working on a specific task or project that requires different apps. Stage Manager works in concert with other macOS windowing tools like Mission Control and Spaces.

With this feature (also found in iOS 16.1 and iPadOS 16.1), you can create a whole separate iCloud library that’s shared with up to five other people. Everyone can freely contribute some or all of their own pictures and videos. Or, you can set up the shared photo library to contribute specific photos based on start date or people.

macOS Ventura brings several changes to apps like Safari, Mail and Messages. The Messages app in macOS Ventura, iOS 16.1 and iPadOS 16.1 permits you to edit a sent message or revoke it, but you have two minutes to do that.

All three updates also enable support for AVIF images for the first time on the iPhone, iPad and Mac. This codec produces smaller files than the ubiquitous JPEG while preserving more detail and fewer compression artifacts. This relatively new image format is backed by Google, Microsoft, Amazon, Netflix and other companies.

macOS Ventura also includes several small but useful changes across apps and the system that make it a worthwhile upgrade. Like, you can now hand off FaceTime calls between ‌iPhone‌, iPad and Mac. In the Messages app, Ventura lets you mark threads as unread, revoke an iMessage, edit a sent message and use SharePlay.

The new Shared Tag Groups feature is available in Safari, System Preferences now looks a lot like the iOS Settings app, mail scheduling is supported and so on.

Is macOS Ventura worth installing?

If you use your Mac for work, it’s probably a good idea to wait until Apple addresses the most glaring complaints and fixes critical bugs.

Major Apple OS releases tend to be a bit rough around the edges, so it pays to jump on the action a few months later. But for the vast majority of people, macOS Ventura should be a good release with several strong features.

Installing Ventura on a dedicated partition?

If you’d like to install macOS Ventura without overwriting your existing macOS installation (to choose which OS to load at boot time), we have a tutorial explaining how to create a separate macOS Ventura volume partition in macOS.

Will you be installing the macOS Ventura update on your Mac? And if so, which new features are you looking forward to the most? Let us know in the comments!