The built-in Messages app in iOS 16, iPadOS 16, and macOS Ventura lets you delete a sent iMessage or even edit one if you wish to fix a typo or make a correction. So let’s see what you need, and how to edit a sent message on iPhone, iPad, and Mac. 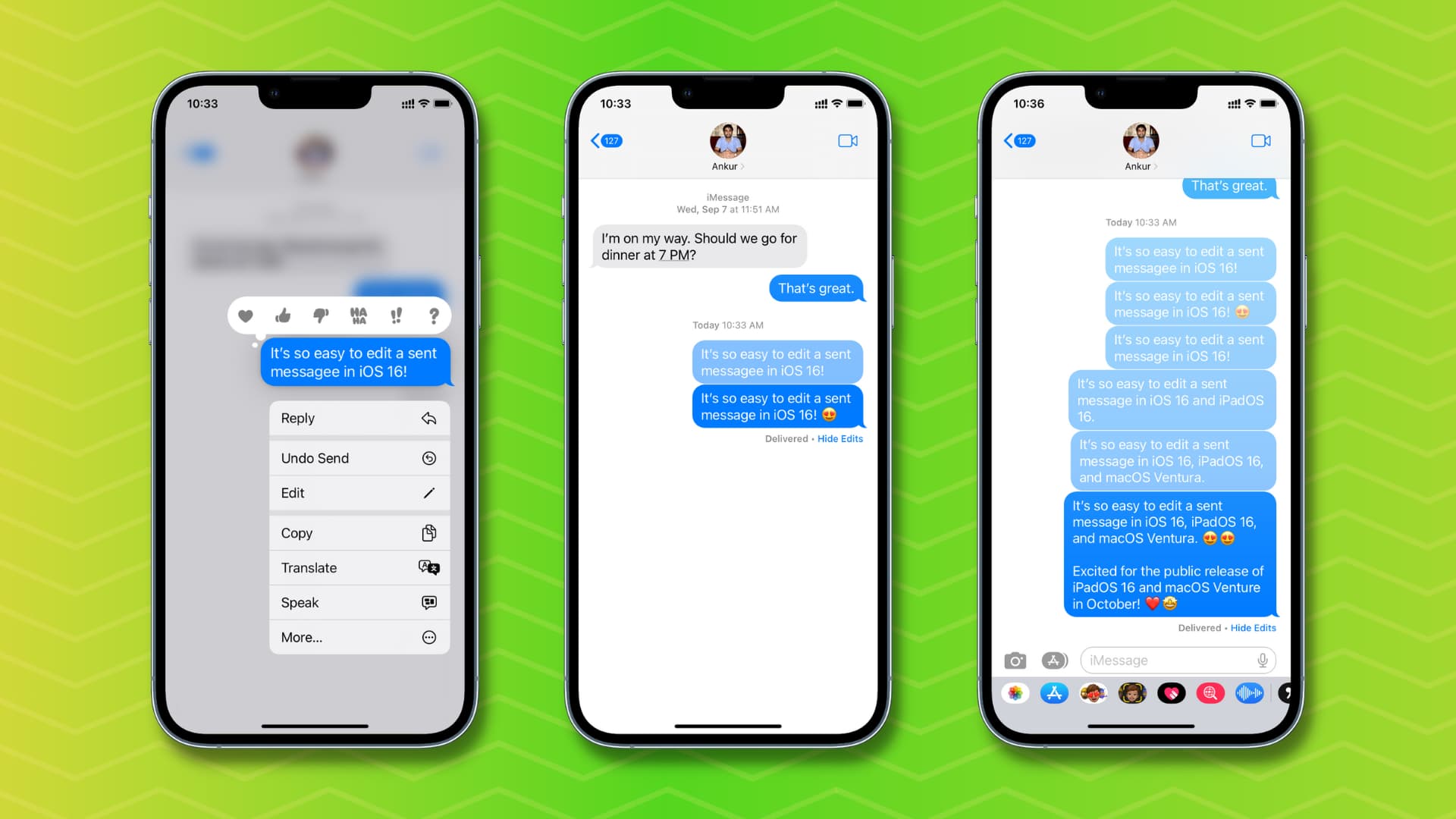 Edit sent iMessage: hide
1) Requirements
2) How to edit a message
2.1) On iPhone and iPad
2.2) On Mac
2.3) On Apple Watch
3) How long do I have to edit a message?
4) How many times can a message be edited?
5) Will the receiver see the edited message?
6) What to do if you don’t want the receiver to see the edit history?
7) Can you edit a sent SMS?
8) Don’t see the Edit option in the Messages app on iPhone, iPad, or Mac?
9) What happens if I edit a message sent to someone on iOS 15, iPadOS 15, or macOS Monterey?

To edit a message you’ve already sent out, you (the sender) and the receiver will have to update your devices:

How to edit a message

Follow these steps to edit a message on iPhone in iOS 16: 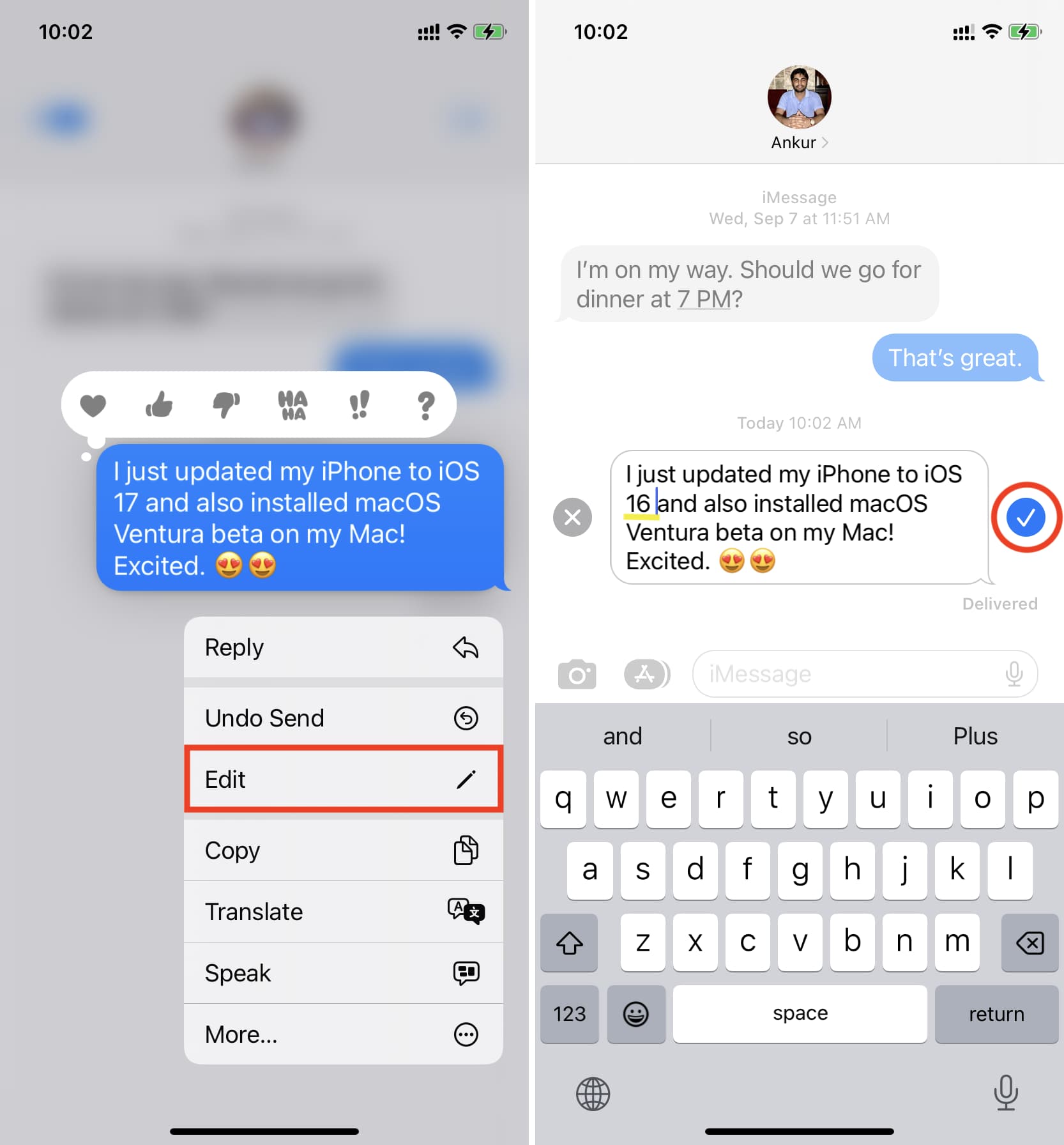 You have successfully edited an already sent message. This edit will reflect on the receiver’s device. But, as mentioned, they can see the changelog of the message by tapping Edited. 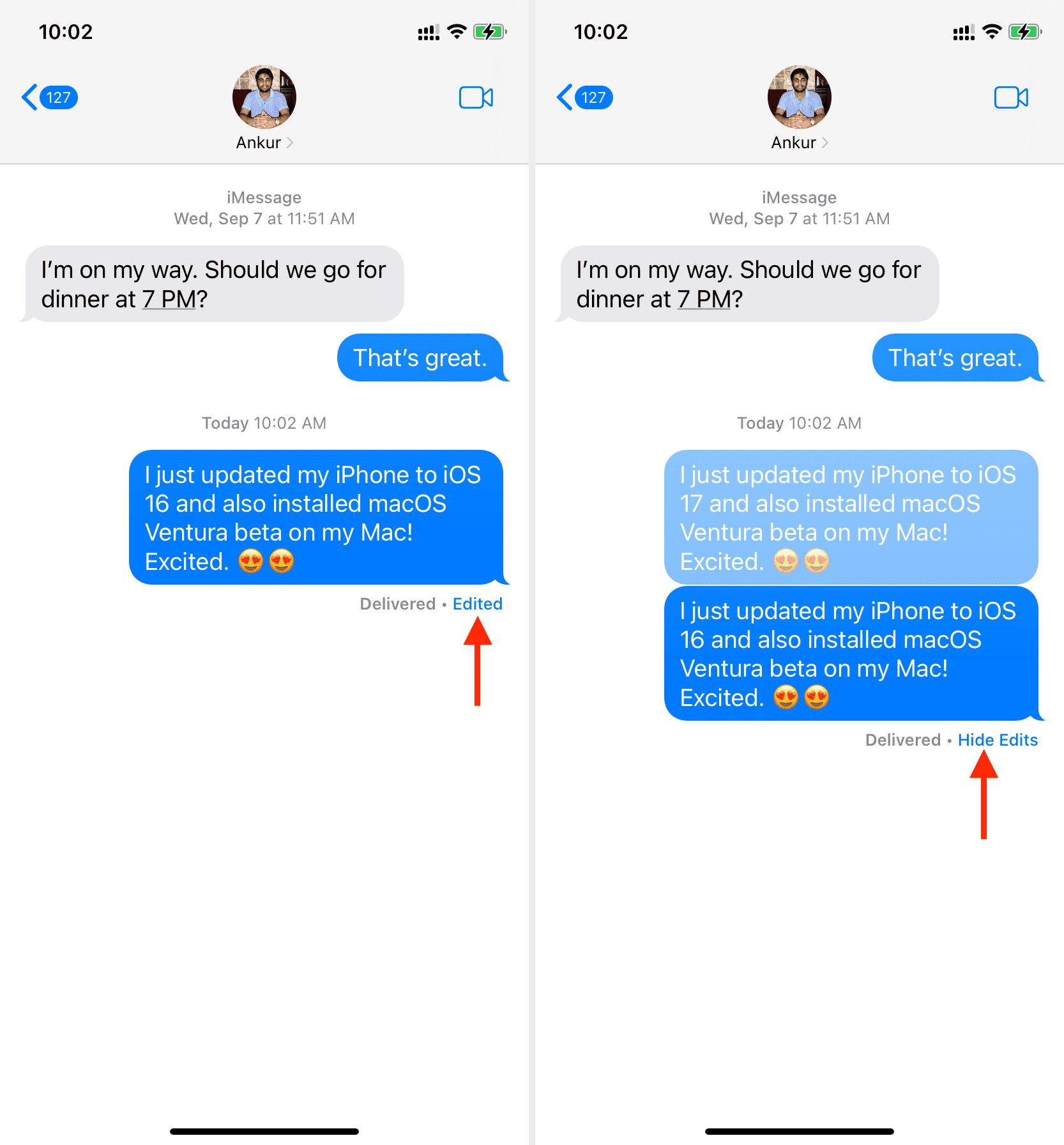 Here’s how to edit a sent iMessage on Mac:

Even after you have updated your Apple Watch to watchOS 9, you don’t get the option to edit a sent message from your wrist. When I press a recently sent message on my Apple Watch running watchOS 9, it shows the usual reaction, share, and reply options. But there is no edit button.

However, there is a workaround.

Suppose you sent a message from your Apple Watch that you wish to edit. You can’t do it on your watch, but you can go to that conversation on your iPhone and edit the message from there.

Finally, though the Apple Watch Messages app doesn’t let you edit the message, it shows the edit history. You can tap Edited and see the changes. 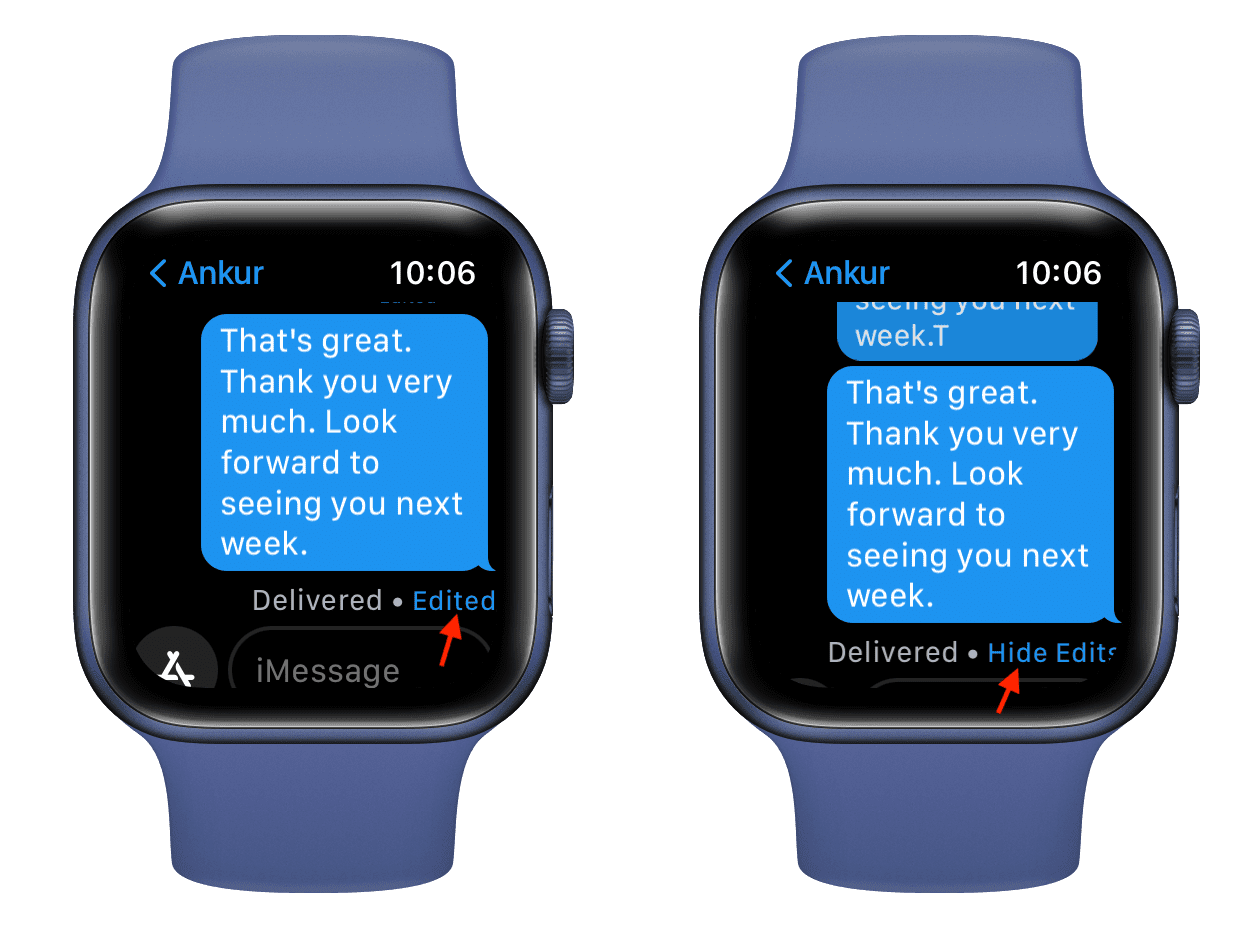 How long do I have to edit a message?

You have the ability to edit a sent message for up to 15 minutes after sending it.

How many times can a message be edited?

You can edit a sent message up to 5 times, of course, within the 15-minute window.

Will the receiver see the edited message?

Yes. After you have edited a message, a tiny blue “Edited” label appears below that message for you and the recipient. The receiver can tap “Edited” to see a record of edits made to that message.

What to do if you don’t want the receiver to see the edit history?

If you don’t want the receiver to see the previous version of the edited message, your only option is to Undo Send the message instead of choosing to edit it. However, remember that you have 15 minutes to edit a sent message but only 2 minutes to recall a sent message.

Can you edit a sent SMS?

No. SMS (green bubble) is sent and managed via your carrier, and you can’t edit it. You can only edit iMessage (blue bubble) that is sent over Wi-Fi or cellular data and is managed by Apple. 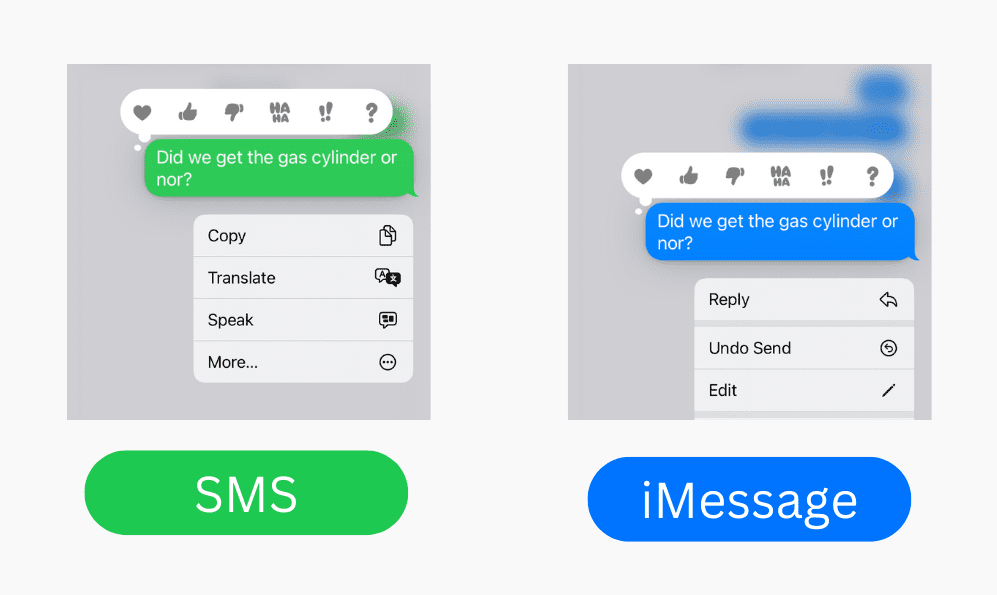 Don’t see the Edit option in the Messages app on iPhone, iPad, or Mac?

Go through these steps if you don’t see the option to edit a sent message:

1) Keep the time frame in mind. You can’t edit a sent message if 15 minutes have passed. To see when you sent a message, place a finger over that message and pull left to see the timestamp.

3) Wait for a few seconds: In my repeated testing, I found that you may have to wait a couple of seconds after sending a message to see the Edit and Undo Send options. 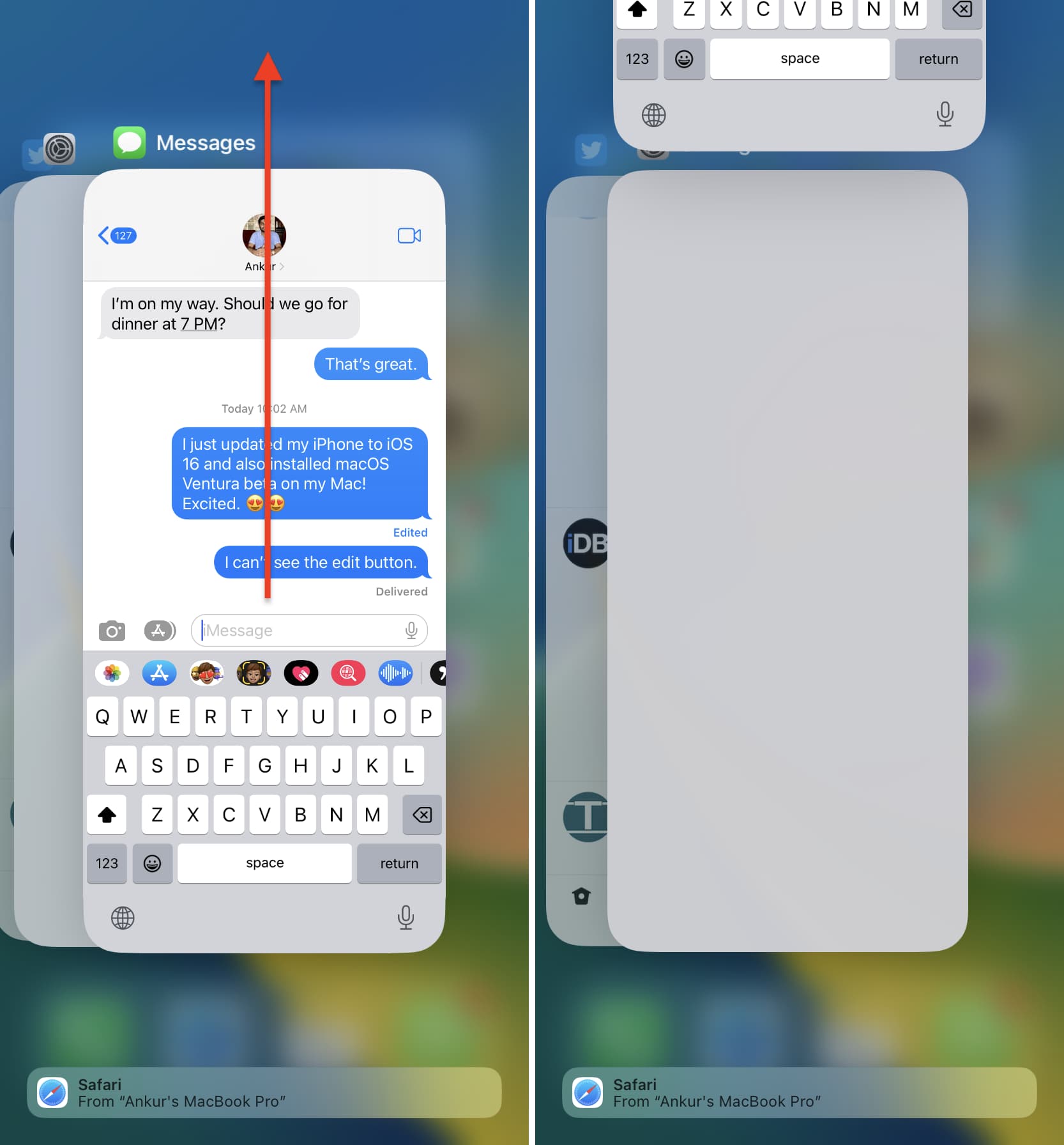 What happens if I edit a message sent to someone on iOS 15, iPadOS 15, or macOS Monterey?

If the receiver’s device isn’t updated to the required iOS, iPadOS, or macOS version, they get a new message every time you edit a message from your end. This new message says Edited to “your edited message.” Here’s how it looks:

What are your thoughts on this new feature?