At the end of July, we talked about a new iOS 9 jailbreak for legacy devices called Blizzard by GeoSn0w, and while the developer’s primary focus at the time wasn’t on iOS & iPadOS 15, that now seems to be changing.

In announcements shared to Twitter this past week, we can see that GeoSn0w feels that more people need to be focusing on the iOS & iPadOS 15 scene, and with no visible updates from the checkra1n team or the unc0ver team recently, and an unknown release date for the upcoming Cheyote jailbreak by the Odyssey Team, that seems like a reasonable principle.

Digging deeper into some of the Tweets, it appears that GeoSn0w will make use of the checkm8 bootrom exploit – the very same exploit used by the venerable checkra1n jailbreak – in an attempt to make an experimental rootless jailbreak for A7-A11 equipped devices running iOS & iPadOS 15.0-15.6.1.

At this time, GeoSn0w plans for the jailbreak to support SSH initially, and eventually add support for tweaking if successful. Some of the language in one of his Tweets reveals that he is unsure of whether he can achieve this based on his current skillset, as he adds that he may need help with the tweaking aspect.

GeoSn0w has been actively Tweeting progress updates, including a teaser image of booting Blizzard’s patched Ramdisk and Kernel on iOS 15.1 with verbose boot: 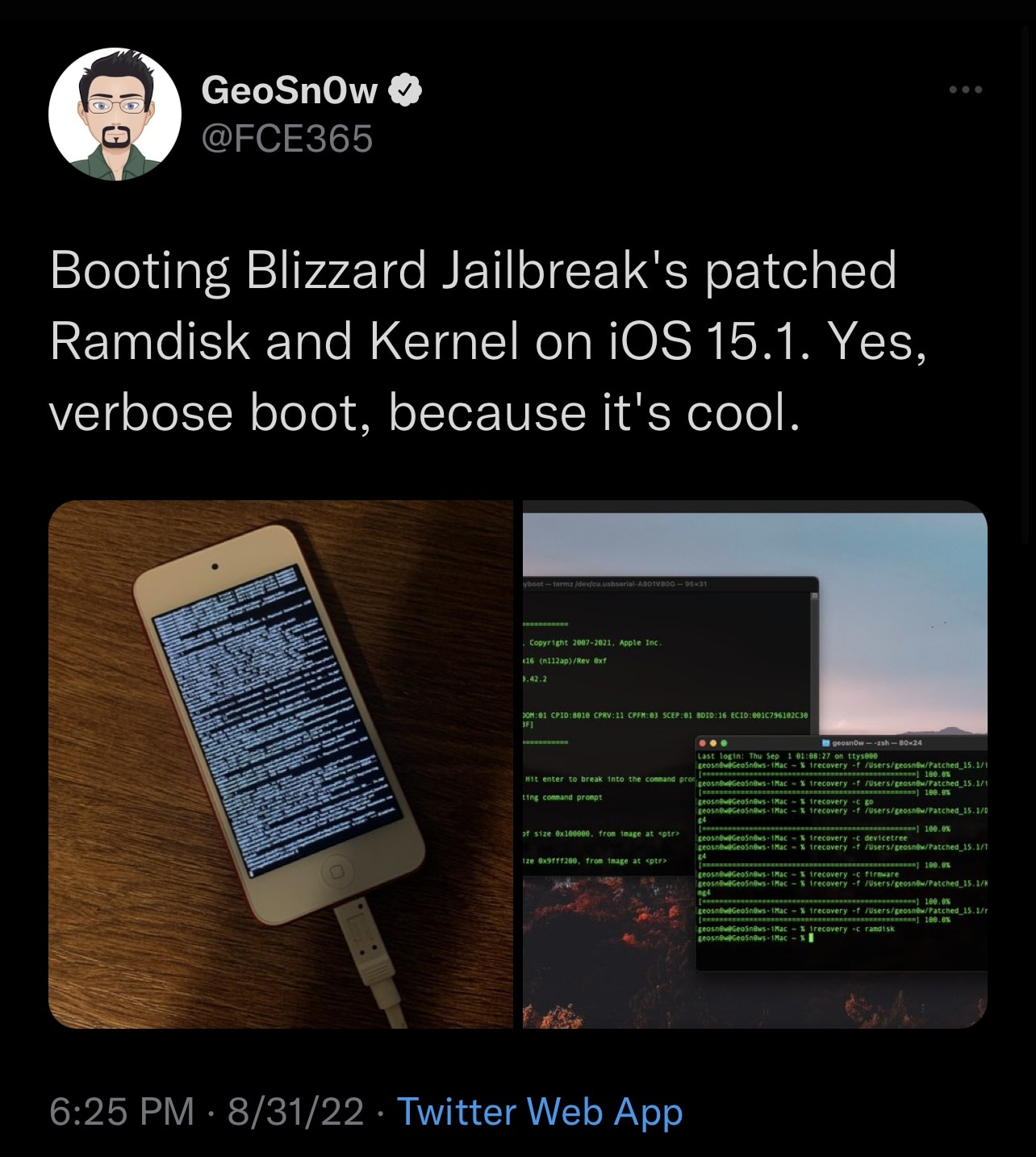 Important things still need a lot of work, such as:

As you’d expect from jailbreak development, this is a very challenging procedure that takes a lot of time and trial and error before it can be tested and released for public consumption. With that in mind, GeoSn0w is not making any promises to the community. While he is trying to make a jailbreak, the fact remains that he seems unsure of his ability to complete the jailbreak and is merely attempting to try.

Since GeoSn0w’s attempted jailbreak will operate via the checkm8 exploit, it’s important to note that the Odyssey Team’s upcoming Cheyote jailbreak will support much newer devices, but it will only work on iOS & iPadOS versions 15.0-15.1.1. If successful, Blizzard for iOS & iPadOS 15 will only support older A7-A11-equipped devices, but will work on a wider range of firmware ranging from 15.0-15.6.1. Notably, even Siguza of the checkra1n team appears to be working on iOS & iPadOS 15 support, however there is no ETA for it.

For now, it seems like this could be something to keep an eye on, but just keep it in the back of your mind that no releases are being promised and this is very much an experimental attempt at creating another iOS & iPadOS 15 jailbreak. While we don’t advise that you hold your breath, we do wish GeoSn0w good luck on his journey.