You can now use WhatsApp emoji reactions to respond to messages with emoticons, plus send bigger files and create massive 512-people groups.

Of all the three new features, message reactions seems to be on top of many people’s wish lists. It’s important enough to warrant a personal endorsement from Meta CEO Mark Zuckerberg who announced message reactions in a post on Facebook. This is on top of WhatsApp’s own announcement.

As with all major updates, emoji reactions are being released to all users, gradually, over the next seven days. Update WhatsApp on your iPhone to the latest version [App Store link] and see if you can send emoji reactions. If not, check back a few days later. The aforementioned new features are supported across the most recent versions of WhatsApp for iOS, Android, the web and desktop.

WhatsApp has recently announced some of the above features, but they were limited to group chats. For instance, emoji reactions and file sharing up to 2GB recently arrived for groups. With today’s announcement, you can enjoy emoji reactions and bigger files in both individual chats and groups.

We are making fast progress on shipping some Communities features 🙏

Reactions 👍❤️😂😮😢🙏 , 2GB file sharing and the ability to add more people to your groups are rolling out!

Should be available to everyone over the coming weeks: https://t.co/k9l5Bf4fNp

How to send emoji reactions on WhatsApp 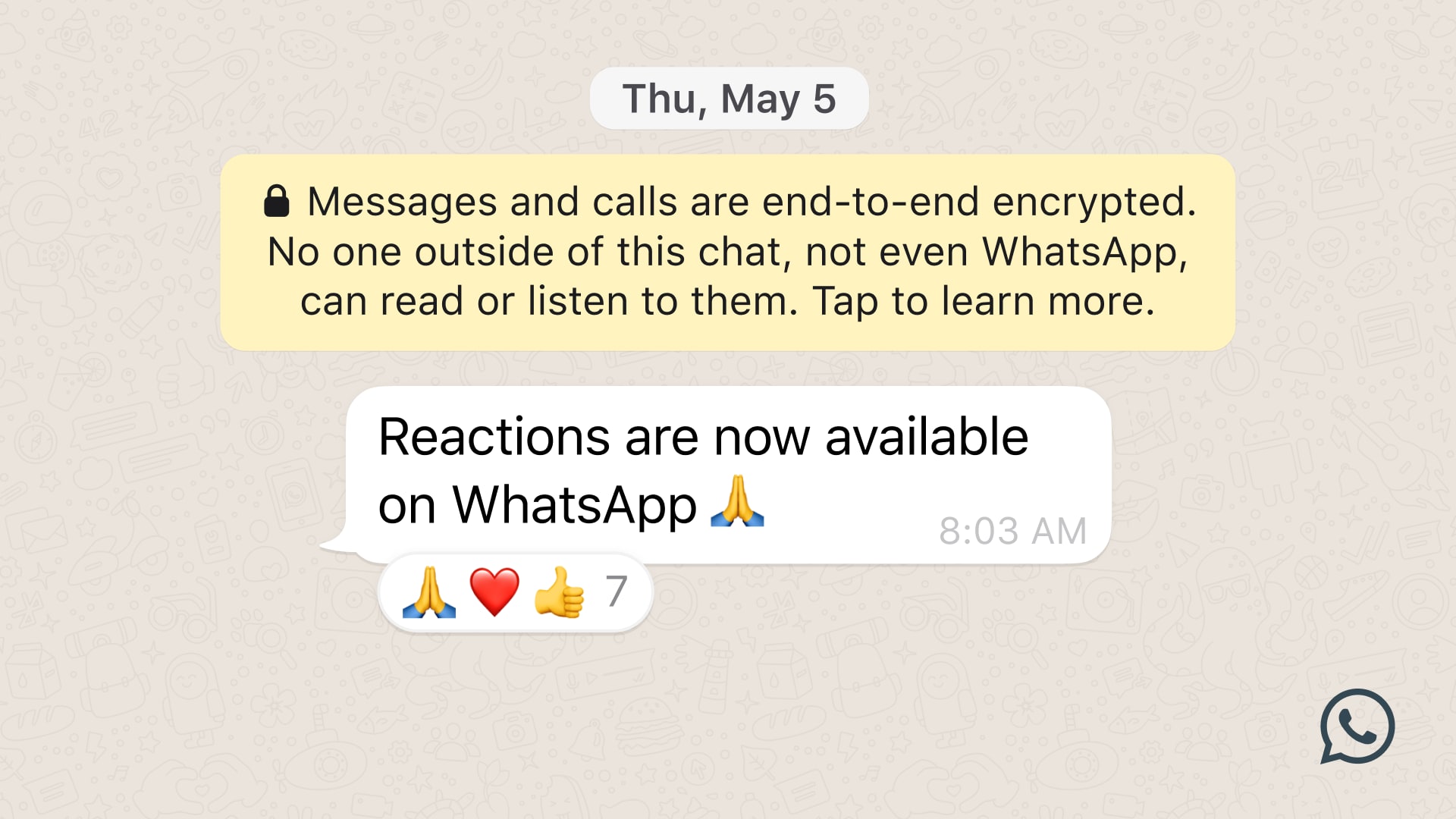 You can send an emoji reaction the same way as you would in other messaging app: Tap and hold a chat bubble until a menu pops up with emoji reactions.

You can use one of the following six emoticons:

As mentioned, emoji reactions are great because you can express your feelings about a topic without sending a message. As such, they help reduce message overload, especially in groups. When someone reacts to one of your own messages, WhatsApp will send you a notification. You can turn off notifications for message reactions in the WhatsApp settings. Read: How to send emoji reactions on iMessage

It's here! Rolling out to everyone over the next week!

When are custom emoji reactions coming to WhatsApp?

Although you cannot react with custom emoji, WhatsApp could already be working on that. “We’ll continue improving them by adding an even broader range of expressions in the future,” the company says.

How to see who reacted with emoji on WhatsApp

You can easily see who sent an emoji reaction to any incoming or outgoing message on WhatsApp. Just hit the reaction icon below the chat bubble to pull up a panel listing all the WhatsApp contacts that have reacted to the message along with the emoticon they sent. Read: How to fix WhatsApp not working on iPhone

How are emoji reactions useful?

Instead of responding with a message, you can react with emoji to express your feelings without sending anything. As with Instagram, Facebook Messenger and many other messaging apps that support emoji reactions, the chosen emoticon is overlaid on top of the chat bubble. If you’ve used TapBacks to send reactions on iMessage, you’re going to love message reactions on WhatsApp. Not only does it feel more natural and easier to apply an emoji reaction on WhatsApp than iMessage, but you get to react with real emotions instead of something like “HaHa” or “!!” on iMessage. Read: How to copy an SMS, MMS or iMessage on iPhone